Spinning out of the show-stopping announcement at this year’s Licensing Expo, Rovio Entertainment and Hasbro, Inc. have teamed up to bring together two of the world’s largest and most popular entertainment brands with ANGRY BIRDS TRANSFORMERS! This fall, IDW will bring the mayhem to comics with the brand-new series, ANGRY BIRDS TRANSFORMERS, expanding on the unexpected backgrounds of this explosive crossover! 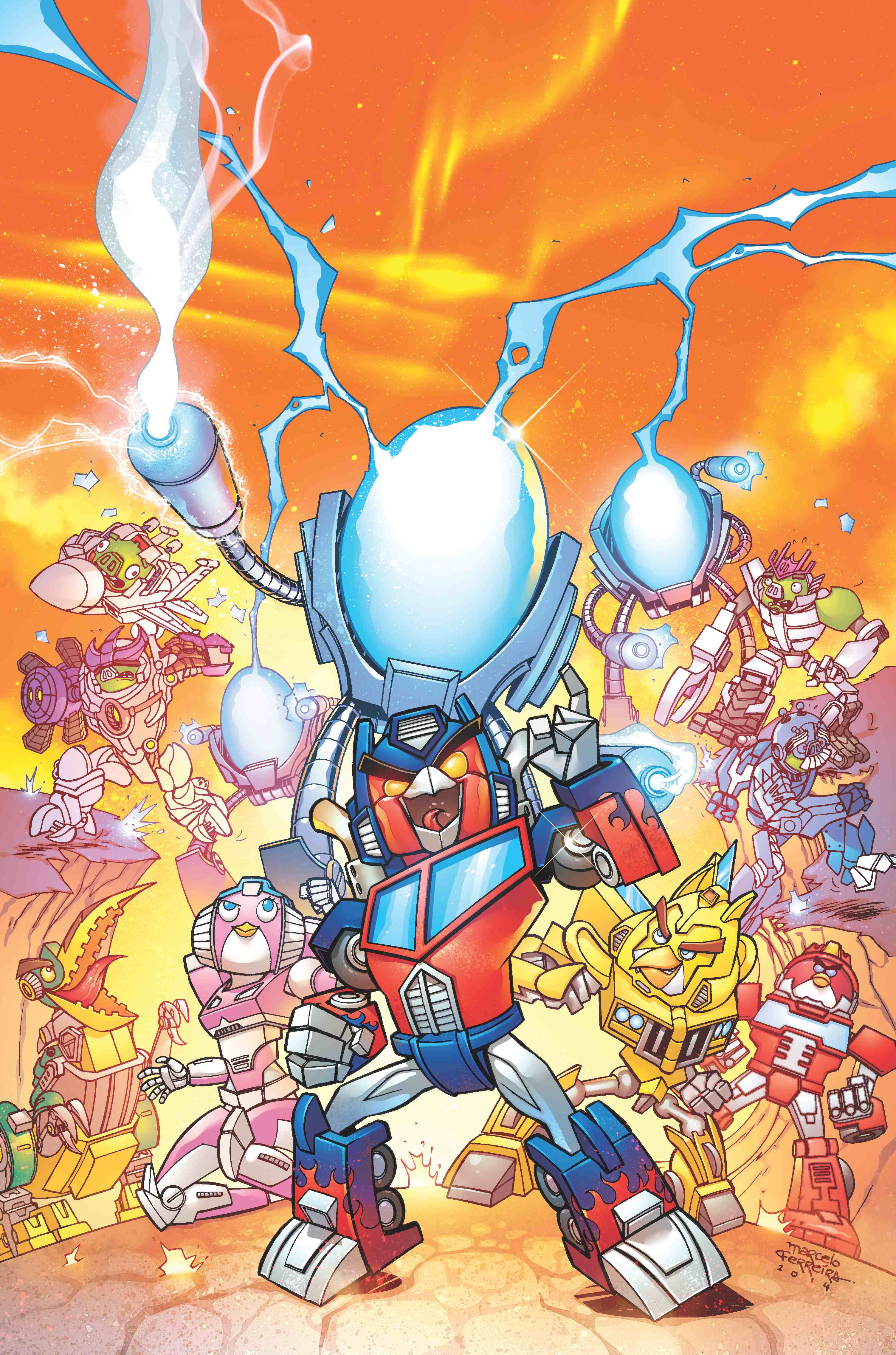 “Comics offer an ideal medium for telling the stories of these improbable but totally convincing mash-up characters from two enormously popular creations,” said Rovio’s Editor-in-Chief, Comics Jukka Heiskanen. “Blending action with humor and adventure with mishap, they will excite and delight fans of both brands.” “We are thrilled to be combining the iconic TRANSFORMERS universe with the quirky world of ANGRY BIRDS,” said Michael Kelly, Hasbro’s Director of Global Publishing. “With the upcoming ANGRY BIRDS TRANSFORMERS mobile game, TELEPODS product line from Hasbro powered by retoy, licensed consumer goods and now comics from IDW, we’re able to give fans fun, new stories and characters they can interact with in multiple ways.” When a DECEPTIHOG raid on the AUTOBIRD ship goes awry, the sought-after ALLSPARK is hurled into the expanses of space, only to find its way onto the shores of Piggie Island, and as its inhabitants will soon find out, the ALLSPARK is much more powerful than any creature could have imagined! Written byRobots in Disguise scribe and IDW Senior Editor John Barber, ANGRY BIRDS TRANSFORMERS is taking the intergalactic epic to a whole new universe! “It’s been a real blast to pair the action of the endless conflict between AUTOBOTS and DECEPTICONS with the zany hijinks of the Angry Birds!” said series writer, John Barber. “Seeing how these icons can interact and combine with each other—I think the end result will surprise everybody!” An all-star flock of TRANSFORMERS artists will be contributing covers for the four-issue series, including Sarah Stone, Guido Guidi, Casey W. Coller, and Livio Ramondelli! Ramondelli will be kicking off the series, providing artwork for a framing sequence of issue #1, focusing on the TRANSFORMERS universe! From there, Marcelo Ferriera (Kung Fu Panda, TMNT New Animated Adventures) will take over on art duties for the series. This unique series offers comic readers a chance to explore two of the world’s most popular brands in a distinctly original way! Whether you’re reading Robots in Disguise and More Than Meets The Eye, or can’t smash enough Piggies, ANGRY BIRDS TRANSFORMERS welcomes everyone to join this collision of epic proportions! About Rovio Entertainment  Ltd.Rovio Entertainment Ltd, the creator of Angry Birds™, is a global industry-changing entertainment media company headquartered in Finland that creatively combines digital with physical, breaking the boundaries of traditional content delivery. What started as a casual game in 2009 became an international phenomenon within a few months of its release. Today Angry Birds is not only the most downloaded game of all time, it is a worldwide known entertainment brand reaching out into publishing, licensing, animations, books and location based entertainment. Rovio’s animated Angry Birds feature film is slated for July, 2016. www.rovio.com About HasbroHasbro, Inc. is a branded play company dedicated to fulfilling the fundamental need for play for children and families through the creative expression of our world class brand portfolio, including TRANSFORMERS, MONOPOLY, PLAY-DOH, MY LITTLE PONY, MAGIC: THE GATHERING, NERF and LITTLEST PET SHOP. From toys and games, to television programming, motion pictures, digital gaming and a comprehensive licensing program, Hasbro strives to delight its global customers with innovative play and entertainment experiences, in a variety of forms and formats, anytime and anywhere. Hasbro Studios develops and produces television programming for more than 180 markets around the world, and for the U.S. on Hub Network, part of a multi-platform joint venture between Hasbro and Discovery Communications (NASDAQ: DISCA, DISCB, DISCK). Through their deep commitment to corporate social responsibility, including philanthropy, Hasbro is helping to build a safe and sustainable world for future generations and to positively impact the lives of millions of children and families every year.