Over two weekends this June, IDW CEO & Publisher Ted Adams and Chief Creative Officer/Editor-in-Chief Chris Ryall will be on hand at the Supanova Pop Culture Expo in Sydney and Perth, Australia, giving international fans an inside look at the workings and future of IDW Publishing! Together, they’ll be hosting panels, signing books, and celebrating IDW’s 15th Anniversary with fans from across the globe. From June 13-15, Adams and Ryall can be found 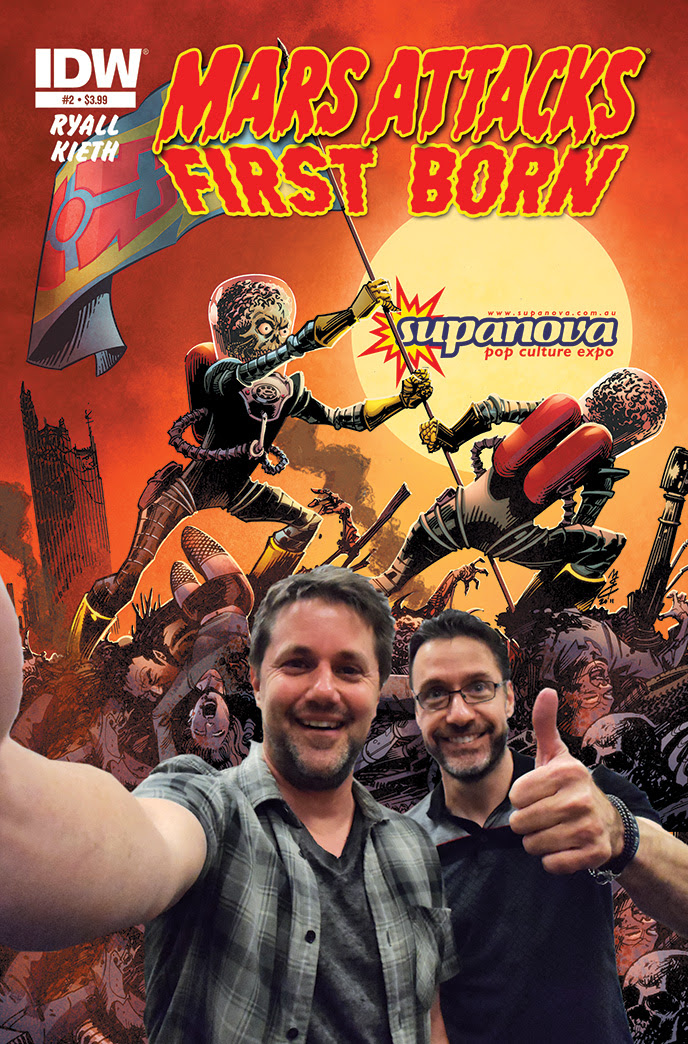 at the Sydney Showground, when Supanova kicks off in the metropolitan hub. At the IDW booth, you can stock up on IDW books as well as pick up an exclusive Supanova convention cover to Mars Attacks: First Born #2, written by Ryall and illustrated by Sam Kieth. The exclusive image adorning the cover is the first-ever “photo-selfie” with Adams and Ryall. This unique convention exclusive is limited to 250 copies for each of the Supanova conventions they will be attending this summer. Also signing at the IDW booth will be artist/designerAshley Wood, who will be showcasing an exclusive action figure through his 3A Toys line, as well as an array of his many IDW art books and comics, such asZombies vs Robots, co-created with Ryall. TMNTcover/trading-card artist, Jon Sommariva, will also be signing and sketching at the IDW booth during the conventions. At each of the two conventions, Adams and Ryall will be hosting two IDW-focused panels; one of which details the history of the company, celebrating its 15th anniversary in 2014; the other panel will be an open forum to discuss new and upcoming projects and field questions from fans, too. In Sydney, the first panel will take place on Saturday at 10:30, with the second following on Sunday at 11:00. Please refer to the Supanova website for additional information and panel times in Perth:http://www.supanova.com.au IDW will be conducting Cover Talent Search

sessions and General Portfolio Reviews at both shows. In Sydney, cover artists can bring their portfolios by the booth on Friday, from 15:00 – 16:00, and 14:30 – 15:30 on Saturday and Sunday. General portfolio reviews will be conducted from 16:30 – 17:30 on Friday, and 16:00 – 17:00 on Saturday and Sunday. The following weekend, June 20th – 22nd Supanova and IDW head to the Perth Convention & Exhibition Centre, where panels, portfolio reviews, and access to the exclusive Mars Attacks cover will again be taking place throughout the weekend. Aspiring artists in Perth can bring their cover work for review from14:30 – 15:30 on Saturday and Sunday, and general portfolios by between16:00 – 17:00. Follow IDW on Facebook at facebook.com/idwpublishing and on Twitter @IDWPublishing for updates during the show, and to find out where we’ll be next!