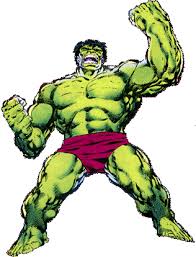 Here is the article from The Hollywood Reporter.

Marvel and ABC are developing a TV return for comic icon the Incredible Hulk. CBS last produced a memorable series featuring the jade giant that ran from 1978-82 and starred Bill Bixby and Lou Ferrigno.

The news comes as DC Comics heroine Wonder Woman, who had a TV series during the 1970s, is also being prepped for a return to the small screen.

Hulk is one of two projects that are priorities at Marvel Television, Marvel Studio’s TV division, which has been operating under the radar since Jeph Loeb took the reins at the end of June.

The second hot property is “Cloak and Dagger,” which is being developed for ABC Family.

Both are in the early stages of development; Hulk has a “showrunner wanted” placard around its neck. ABC had no comment. Meanwhile, Loeb is meeting with writers to hear ideas for “Cloak and Dagger.”

Marvel began narrowing it list of possible TV adaptations in May with a presentation on the Disney lot. Executives presented ABC suits with a list of titles they identified as possible series:

• “Heroes for Hire” (focusing on ex-con Luke Cage offering to take on bad guys for a price);

• “The Eternals” (a race of superpowered beings live amid humanity in secret, inspiring legends);

• “Moon Knight, the Red Hood” (a low-rent criminal discovers a cloak that gives him superpowers);

• “Ka-Zar” (a Tarzan-type and his saber-toothed tiger must journey to the concrete jungle to seek justice);

• “Daughters of the Dragon” (a dynamic female duo, one with a bionic arm and the other a granddaughter of a samurai, open a private-detective agency); and

• “The Punisher” (one man wages a war on crime; already adapted as two feature films).

Ironically, “Cloak and Dagger” wasn’t on the list. (Hulk was.)

Although the focus appears to be on “Hulk” and “Cloak and Dagger,” “Punisher” also has been selected from the herd and is eyed as a cable play, but that is even further away. Marvel’s TV division wants to take things slow, according to insiders, focusing on one or two shows, making sure they are the best they can be and establishing a quality brand before moving forward.

Marvel is in the middle of establishing a shared universe with its movies (the pics and the characters form one big story), but it’s unknown whether the studio will undertake a similar path with TV. Also unknown is whether there would be a connection between the film world and TV world.