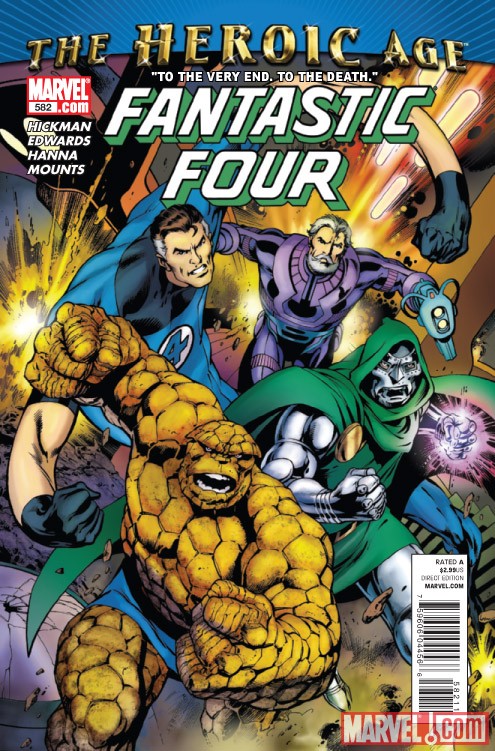 At collapsed Chronopolis, after the heat death of the universe, Reed, Ben, Doom and Nathaniel Richards battle for both the past and the future. It’s the end of everything as two heroes sacrifice themselves for their family

What Hickman is doing in Fantastic Four (and in other titles) is showing that you can have a great plot, that is driven by both characters and action, without having uber-violence, over the top sex or “dark” heroes.  Thus proving that the “Heroic Age” formula works and drawing fanboys a map to the enjoyable comic book geography that exists between the cheesy Saturday morning Super friends and the gritty Alan Moore-ish titles.

In classic FF fashion, this story revolves around heroes and villains time traveling to try to change the future.  Nathaniel Richards has gone back to the past to get help from his son during Reed’s college years.  It turns out there is a very Highlander-esque battle going on where all of the Nathaniel Richards from the Multiverse, at the command of Immortus,  must hunt and battle each other down until there is just one left.  Or at least that is the story 🙂

Nathaniel ends up not only getting help from a young Reed, but also from a college age Ben and a pre-masked Victor Von Doom.  They do win, but at what cost and for what purpose?  From the get go, I had pegged Reed’s dad as being the bad guy here for several reasons – 1.) his story was pretty trite and formulaic 2.) it involved Immortus (one of the lamest versions of Kang this side of Rama-Tut) 3.) he went back to pre-powered and much more naive Reed rather than modern kicking butt and fixing the universe Reed and 4.) well, he’s Nathaniel Richards and is almost never what he seems.  Needless to say, Hickman tells a good story and took most FF fans for a turn as Nathaniel ends up being more of a victim and less of a nemesis.

This issue leads into an “End of the FF” story arc, not that we haven’t seen this before, but with Hickman at the helm it’s bound to rock out!

Bottom line: Compared to a great deal of what is coming out of Marvel, Fantastic Four shines as an example of what an adventure-based super-hero comic should be!

Note: Also in a very traadional MArvel-way, the cover deals with the story in a very symbolic way… at no time does that scene actually happen.