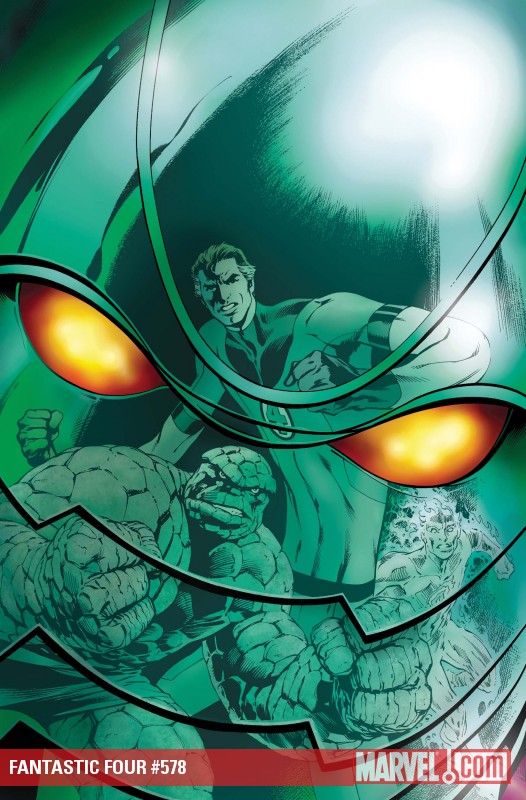 Death, life and resurrection…Annihilus is back and hungry for revenge! Prime Elements part four: The Cult of the Negative Zone!

This is part four of “Prime Elements” where Jonathon Hickman is setting up an epic “big-picture” event for Marvel’s First Family that ties into the Annihilation Wave, War of Kings and even Civil War.  Anyone who has read all four issues (which I had to do last night, to make sure I didn’t imagine big frickin’ gaps in the story) either has enjoyed the non-traditional narrative that is more focused on cause / effect of events and the patterns of impact on the main characters as “players” in the cosmic game… or has hated the lack of conventional character interaction, the loss of focus on the FF as main characters, the vague story transitions (“later” which could mean moments or months), the numerous detail “holes”, Valeria’s “I-pad”ish narrative and the emphasis on groups of characters we just met (the lost Atlanteans, the worshippers of Annihilus and the Universal Inhumans)

hmmm…. guess which group I fit into?

I love Hickman’s work, I really do.  I think this guy is the real deal and could very well be Marvel’s answer to Geoff Johns, but this 4-part arc was like watching opening credits that just wouldn’t end.  It’s this big epic set-up for issues that are down the road (like end of 2010).  And given that I don’t follow Marvel’s “cosmic” storyline closely (War of Kings, Guardians of the Galaxy, etc.), I just find myself not caring.  I was intrigued back a few issues when a future Franklin shows up and gives more or less a prophecy about the war of “four houses”, but after having every issue sharply veer from outcast group to outcast group my interest has waned.  As a huge FF geek, I can applaud Hickman’s plot in the sense that it gives a literal tour of Fantastic Four history (Mole Man, High Evolutionary, Namor, Inhumans, The Negative Zone) and that has been fun for me, but I can imagine a young reader’s head spinning more than someone just walking into Lost.

And something that personally pissed me off… Where is Ben? Really!  This issues opens with Johnny being taken by a bug creature playing the club babe (very much like the metallic-tailed femme fatale from Transformers 2) and he and H.E.R.B.I.E. take it on and start messing with the Negative Zone.  The robotic 70’s throwback has way more airtime than my favorite Marvel character.  Totally tragic in my eyes.