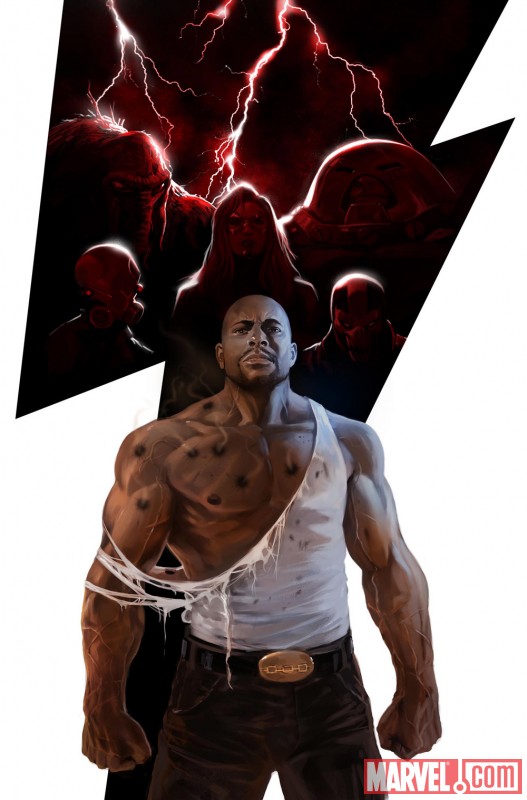 With the upcoming Heroic Age from Marvel, many of the team rosters are getting overhauls.  Here is an update about the Thunderbolts… Luke Cage leads and joining the cast is Marvel’s premier plant-based hero – Man-Thing!

from Marvel.com – A new age sweeps over the Marvel Universe this year, an age where heroes will be heroes and villains just may become more than villains too.

At least, that’s the plan with Jeff Parker’s THUNDERBOLTS which gets a new modus operandi with May’s issue #144. Luke Cage takes the reins of the new T-Bolts, who find themselves incarcerated on the Raft along with just about every other super-criminal in the world. The early line-up consists of familiar faces like Juggernaut, Crossbones, Ghost, Moonstone and…Man-Thing.

In contrast to the Thunderbolts’ “villains masquerading as heroes” status quo of the past few years, these baddies will really be looking to earn their place on the side of angels-or so Cage hopes.

“Though the Thunderbolts program fell way, way off of what it was intended for once Norman Osborn took it over, some great things have come of it,” Parker notes. “And some people high up want it incorporated into the facility where all super-criminals will be incarcerated, in hopes of rehabilitating a few of these people. The thinking being, there shouldn’t have been so many heavies for Osborn to get on his side recently, let’s try to create more heroes.”

The eternal question of whether truly evil men and women can change will of course be at the forefront of the story, but one man in particular has some strong thoughts on the subject: Cage, a former criminal himself.

“Cage understands all about second chances and getting bad breaks in life,” says Parker. “And he’s hard enough to deal with the roughest this world has. He really brings the gravity and strength of character that reforming a program like this needs. Also, there will be limited support for the Thunderbolts because a lot of high-level government decision makers don’t think it should exist at all, so it’s really his reputation that the whole thing hinges on.”

Cage and the new T-Bolts will have their work cut out for them proving themselves to the government, the super hero community at large and, more importantly, to themselves. Parker holds the fine details of their missions close to his vest, but does offer some information:

“There’s fallout from recent events that needs to be dealt with, and also a lot of bad situations that were made worse by there not being a S.H.I.E.L.D. in place to handle things. There are ugly, nightmarish threats. But also there’s a fair amount of dealing with life as a prisoner. Elements in the Raft still have influence, even locked away. You can imagine after working with pros like the Avengers, Luke is going to have a problem with an undisciplined team that doesn’t watch each other’s backs.”

With so much going on both inside and outside the halls of the Raft, THUNDERBOLTS needs an artist who can handle everything from the mundane to the fantastic, and Parker thinks Kev Walker has what it takes.

“We’re just now starting up, and I’m looking very forward to working with Kev,” the writer shares. “I think he can hit the notes that this direction needs, and give readers heavies who show complexity. He can build a convincing world like few other artists.  It will be a fine looking thing! Mainly I want to see him draw Man-Thing.”

Speaking of Man-Thing, the question on everyone’s minds remains: “How does he fit in?”

“You’ll see,” Parker promises. “He was arrested by H.A.M.M.E.R. in a recent issue of DARK AVENGERS, and it’s been realized that he’s a powerful creature to be on the loose who should be monitored more. But I don’t want to give away too much about him yet. It, I mean.”