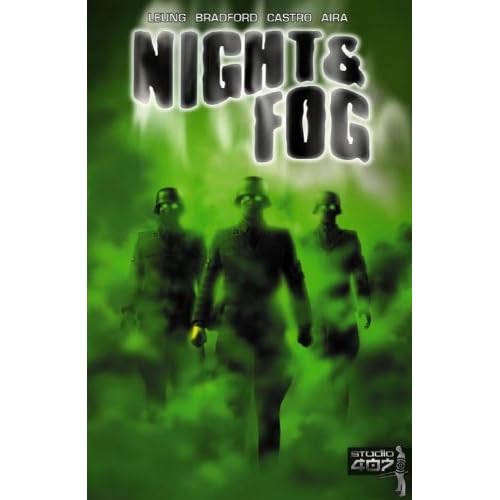 A few months ago I came across a great indie Horror book Night and Fog (review here) that I thought would make a great movie and you know what?  It’s headed there!

(December 22, 2009, Hollywood, CA) Studio 407 announced today that their sci-fi horror property Night and Fog has been optioned for film by renown producer Gil Adler and Shane McCarthy. No stranger to comic book material, Adler has produced such comic book films as “Constantine,” “Superman Returns,” as well most recently “Dead of Night” which was based on the popular Italian comic book Dylan Dog.

Said Adler: “This material is definitely in my strike zone in more ways than one. And having produced the “Tales from the Crypt” series and some Dark Castle horror films, I can say horror’s a genre I know intrinsically. But what really appealed to me wasn’t so much the genre trappings, but rather the characters that really drive this story.”

Tied to an unsolved mystery from World War 2, Night and Fog, tells the story of a “Frankenstein” like infectious mist unleashed on a military base that transforms its victims into preternatural creatures of the night. But when the survivors try to kill them, they adapt and change into something even more horrific and unstoppable. Caught in between, is a security officer on the base who must escape this gauntlet of horror to save his children before the creatures kill them or the fog infects them.

Added Adler: “When I read this I knew I had to take it off the market. It’s a great high-concept that blends the gothic horror of the Hammer films with the sci-fi horror of “Aliens” and “The Thing.”

“We’re really excited to see Gil’s take on the story,” remarked Studio 407 Managing director Alex Leung. “We’re also honored to be working with an experienced guy like Gil, who knows how to play up iconic figures and can tie them into a horror setting. He’s the perfect person to bring Night and Fog to life”.

Adler and McCarthy are also working together to produce the adaptation of “Havana Nocturne” along with Eric Eisner, and recently optioned Ken Bruen’s crime thriller “Tower.” Leung will also serve as a producer on the film, having worked on Jackie Chan’s “Around the World in 80 Days” as an associate producer, and most recently executive produced the horror film “Hunter” with Stallion Media (“Punisher: WarZone”).

Night and Fog is currently available in comic shops in the single issue format and digitally on I-Phone through Comixology. It will be hitting stores in a trade format April/May 2010.

To see more of the products from Studio 407 you can visit www.studio-407.com. Retailers should email info@studio-407.com to get the release information mailing list.