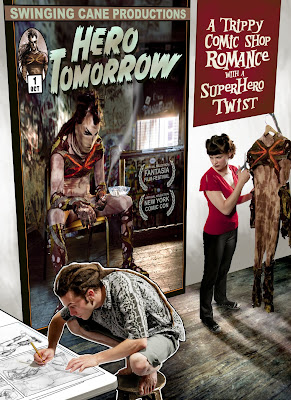 Well, okay maybe not today… but Monday.  Last year at the Motor City Comic Convention, I had the privilege of screening Hero Tomorrow, an independent film by Swinging Cane Productions.  I loved it then and I love it today, check out the write up here.

And now, this break through film that was once only available at very cool geek gatherings, comic conventions and film festivals is now available for you home theater glory!

Check out the official site here!

David, a struggling comic book creator from Cleveland, spends his days cutting grass and his nights smoking it while desperately trying to keep his superhero fantasies alive. When Robyn, his aspiring fashion-designer girlfriend, makes him a Halloween costume of his original character Apama, it doesn’t take David long to hit the streets and begin blundering towards disaster.

This comic book Don Quixote is characterized by surreal flourishes, mixing dream, fantasy, and flashbacks that borrow as much from the art house as the comic shop. A midnight movie for superhero fans.

If you’re local to Cleveland you can get the disc in person from one of our actors (Larry Zjaba) in one of our locations B & L Comics (the comic shop backroom in the movie.)