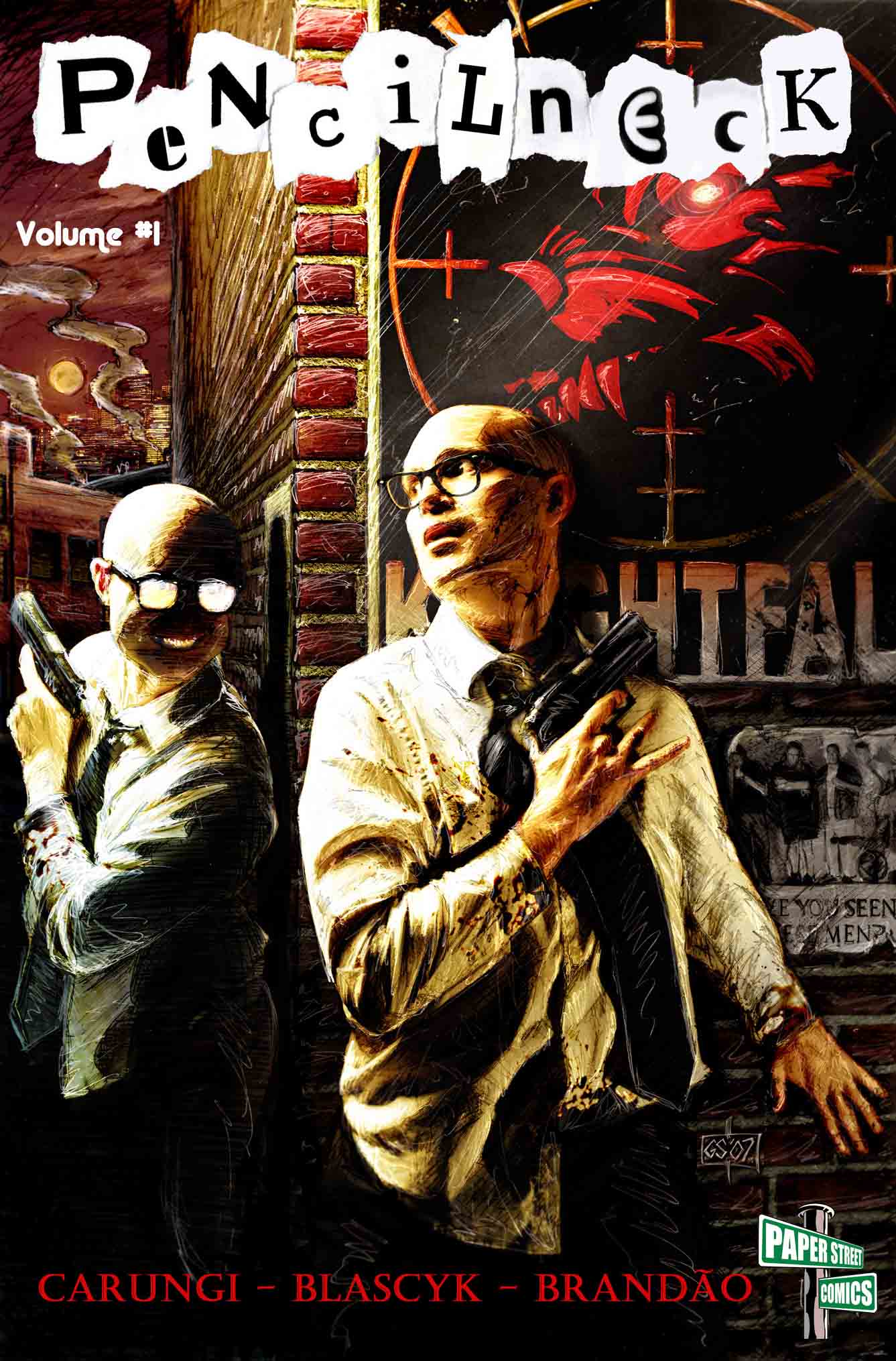 “Jonathan Kincaid is a mild mannered banker with an undiscovered violent streak and has spent the last 22 years of his life punishing himself for the incarceration off his twin brother, Jeffrey. In those years he’s repressed even the slightest feelings of anger which has turned him into a weak-willed pencilneck of a bank manager.

All of that changes when three mob associates crash into his life and offer a trade – the life of his debtor brother in exchange for helping them rob his bank. Jonathan is left with a choice – save the brother he hasn’t seen in years or do nothing and watch him die.“

In the sea of small press and independent comics it’s tough to sift through the sand to find the diamonds.  Victor Carungi, and the creators of Pencilneck, have created that diamond.

To say that I was impressed with Pencileneck is not enough.  Yes, it does have a few flaws that I noticed, but nothing that can’t be fixed.  No, I was not just impressed, I was engrossed.  I was transported into a gritty crime noir world where I witnessed a man pushed to the edge.  Then I saw the same man take a flying leap over the edge into parts unknown.

The main character of Jonathan is a mild mannered bank manager who is going through the steps of his life with little or no adventure at all.  Readers feel genuily sad for Johnathan when they see that the highlight of his day is getting a glimps of his almost useless, but very pretty co-worker.

Then all hell breaks loose.

When I spoke with Victor Carungi at Chicago Comic-Con, he describe Pencileneck in the same genre as Falling Down.  A story about a normal guy who gets pushed too far. After reading, I’m not sure if I put it in that same category.  Our main character doesn’t go nuts because he can. He lets his true self, the side of him that he’s worked so hard to repress, come out because it’s that side of him that is needed to get out alive.  Kind of like Stallone in “Get Carter”.  He’s a guy trying to live his life until that is no longer possible and he has to delve into the dark corners of his mind to get things done.  And who hasn’t wanted to do that from time to time?

With all the heaps of praise I’m putting on this book, I’d be lying if there weren’t a couple flaws that I noticed.  The black and white art is good.  More than good enough to tell a gritty story like this.  But the two issues that stuck out to me the most were the instances where the pacing seemed off and, God help me, some of the lettering.

There are points in the story where the reader takes a bit of a time leap into our character’s near future, but the transition is so sudden the surprising that I didn’t get what was happening at first. When these moments did arrive, and there were only a few, I had to go back and re-read the previous page to make sure I wasn’t missing something. This may have been the point, but I found it took me out of the story.

Now on to the lettering. This is topic that never really gets touched in many reviews, but in this case it was something that bothered me. About two-thirds through the book, they letterers change. Normally this is not a big deal, but the second inker had such a divergent style that t was very noticeable.  Again, normally not a big deal, but it once again distracted me from the awesome story I was reading.

Overall I found Pencilneck to be a very enjoyable read from the Con.  I strongly suggest that you get your local comic shop to order some stock an handthen to people who are new to comics, but love novels.  They get an intro to an amazing stryle and a look at the hard endged stories that comics can have.