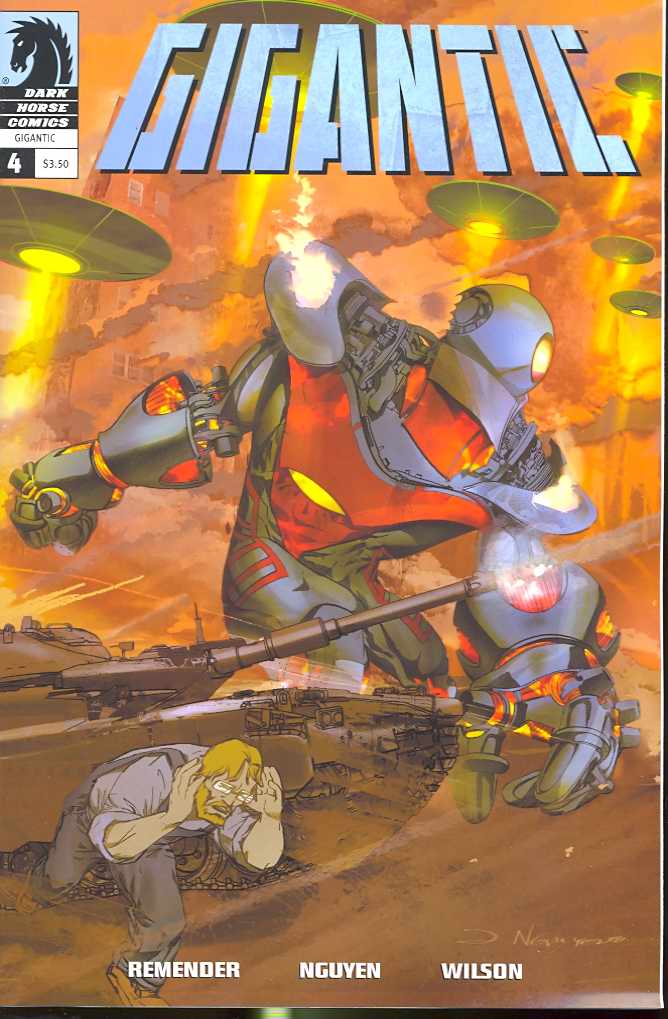 A universe with a Dark Horse Comics in it is a good place.  We need companies with new ideas, a bit of integrity, and some guts to take a couple of risks.

Oh, yeah, “Gigantic”, is not one of his better books.  Like “Sorrow” it just seems half hearted and half thought out.  The premise is that this guy in robot suit used to the #1 brightest star of a galactic TV conglomerate at odds with other cut throat conglomerates.  His & his Networks ratings slipping, he realizes he’s been used (abducted from Earth) and he tries to return there.  This drama catapaults him back up the charts.

Problem I have is the story is not that interesting.  I found it hard to believe these seasoned Alien couch potatoes would find it very interesting either.  The puts a damper on the whole book.  It makes it very hard to suspend my disbelief.  Issue #4 has a nice little twist, but honestly, I felt it was just too late and the book had already lost me.  I found I didn’t really care, and hadn’t been enticed to care about any of the characters.

The strength of book is the are by Eric Nguyen.  His work on Remender’s “Strange Girl” was gorgeous, and why I picked up “Strange Girl” to begin with.  His work here is weaker, though and not as interesting.  The covers are well worth having though (maybe a poster).  Overall, the action is not portrayed particularly clearly.  The Aliens uninteresting.  I think Nguyen’s strength is in his color work, and he’s not doing the colors.