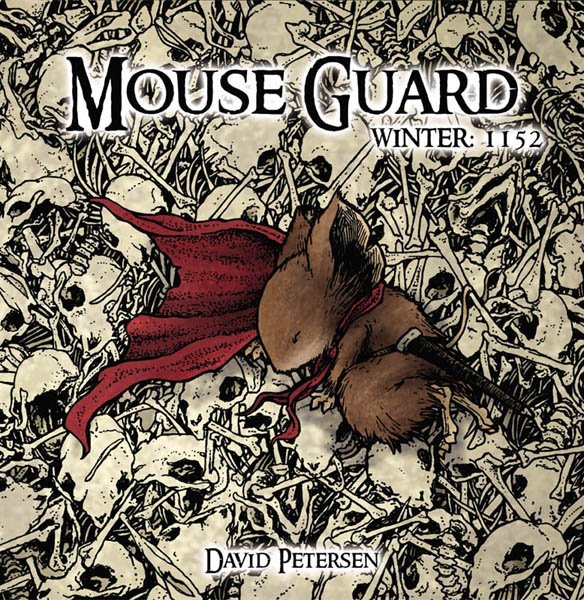 “Bats taking claim of the abandoned weasel kingdom of Darkheather halted Saxon, Kenzie, and Sadies’s progress through the underground nightmare. In a foolishly brave maneuver, Saxon raised sword against them and was carried off into the darkness.

Okay, I know this book came out a while ago. But considering the book was months late, I don’t feel so bad being a few weeks behind on a review.

I’ve met David Peterson a few times and he’s an extremely nice guy. After reading through his blog, I don’t believe these delays are completely the fault of the creators. The comic business is still a business that is subject to all same issues that many businesses are facing these days. Therefore, ThePullbox will continue to recommended Mouse Guard , and any other David Peterson book, for there great art and superior story.

As for this issue? It’s great! Last issue we saw Saxon talking too much smack to a group of bats and got carried away. Was it to his death? Not bloody likely! Saxon is one of the greatest fighters the Guard has ever known. We see Sax get out of his potentially deadly situation and make a discovery that means much to him personally, and potentially a turn in the story.

Meanwhile, Celanawe and Lieam are busy battling an owl in the frozen wastes of the surface. It’s very cool finally getting to see Celanaew and his black axe in full out action.

David Peterson’s writing and art are highlighted throughout this issue. We see his ability to produce smaller panels and large splash pages with deft skill and detail numerous times. Even in what I would consider an action issue, Peterson is still moving his story forward to it’s endgame. As an added bonus we get the “Ballad of the Ivory Lass” which you can find fully composed on his website here!

Overall, this is a great issue and lets hope we don’t have to wait as many months for the next issue.