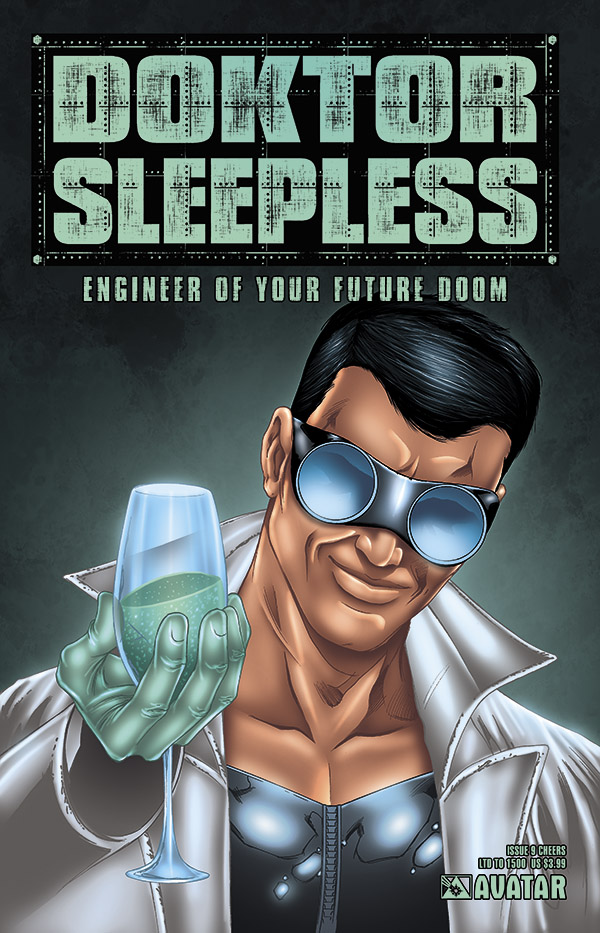 I don’t know what it is about the Warren Ellis Avatar titles. The art is only fair, from Juan Jose Ryp, Mike Wolfer and a bevy of artists with really long, foreign names which I’ll type out below as necessary, the stories aren’t all that original, and there’s something derivative from earlier, superior Ellis works in each of them, but I like them all.

There is just something about the way Ellis frames his stories that make them more engaging, and different from other comic fare. I suppose part of it is that he’s the boss; books can be as long or as short as he wants them. The story is done when Ellis is done with it, not constrained by a set issue run. Just in my own brain I need to sort out why what he does works so much better than so many other main stream writers. Find appropriate words for things, maybe make up some new ones…I’ll get back to you on this. But, I think it’s safe to say he’s better than yer average duck.

Take “Gravel” for instance. GRAVEL, features the combat magician Sgt. Major William Gravel. The storyline is gathering up pieces of evil manuscript from 7 top wizards so the manuscript can’t be misused, but of course the more pieces ya get the more tempted you are to misuse it. It’s not like we haven’t heard that before. In fact, issues #4-6 have essential the exact same plot, confront wizard, battle his alcolytes (run up a wall or tree or similar such), kill nutty wizard and it’s off to the safe house with another piece of the time bomb. But I can’t get enough of it.

Mike Wolfer’s art underwent a metamorphosis early on in this series, something seriously clicked in his head. He went from a dilettante journeyman to a real full fledged artist. I think a lot of this maybe due to the addition of Oscar Jimenez as inker, because Wolfer’s work on Garth Ennis’ “Streets of Glory” is still pretty weak. (Street’s of Glory, by the way has its moments, but basically ends up being a mix between Scoobi-Doo and Unforgiven, which should in itself pique your interest).

I think Cthulu Mythos folks would get a kick out of this series. So if you’re one of those go pick it up. So gets a GRAVEL B+, pick it up for that weird Ellis touch that makes things good.

What the hell. That’s the best way to read this story. Now, this is the least derivative of earlier Ellis stuff. It’s part cyber-punk, part V for Vendetta, part B horror Movie, part Philip K. Dick and other such 1960’s drug culture convention, part H.P. Lovecraft. We don’t really know what the heck it is, or where it’s going, or who’s sane and who’s not, and that I think is what keeps it interesting. Even the secondary characters have more life and personality than many Mainstream title characters from the bigger markets. Nurse is infinitely more interesting than Wonder Woman say, and she’s painted with a few beautiful, simple strokes not the garish, banal details of an inexperienced writer. The art started out stiff and the graphic story telling marginal and has gotten much better of the 9 issues. Rodrigues has a great handle of Light in a very Bryan Hitch, Paul Neary, Mark Farmer sort of way.
Overall B. Because who knows what the…

Steam Punk Victorian stuff is always very cool and very welcome. Borrows intensely from Sherlock Holmes, but with good reason. The art is pretty weak, there’s a lot of sitting round chatting and drinking tea (had to get up and get some myself), but the story and concepts are solid here, and the climax is the inverse of mainstream climaxes, meaning it actually works and it interesting and true to the story, instead of well, usually sucky. Overall B. For trying something different and a good concept well crafted.

“In 1966, a group of superhumans emerged in San Francisco, guided by the man whose unique new drugs gave them their incredible powers, this unified front stood against street crimes and corruption, in defense of their city against any and all assault. Years have passed, and we fast-forward through the tumultuous events of those early years to today, where the idealistic heroes have gone through four incarnations to become The Front Line. But the team is not the only thing that’s advanced over the years, and there are no easy victories when their luck finally begins to run out.”

So, this baby is derivative of another Ellis Avatar recent success, BLACK SUMMER, which I recommend picking up in TP if you can. BLACK SUMMER ended up being more self contained, while the themes it was working with needed further exploration. So perhaps, that’s were we get NO HERO.

Both deal with an exclusive process for created an elite limited number of superhumans. Both groups are extra governmental. Both have their roots in 1960 sub-culture.

Like BLACK SUMMER the art is okay. It is nice to Juan Jose Ryp’s improvement over the recent years, though. It is very much in the vein of Geoff Darrow or Frank Quietly, so I guess that recommends that. For my tastes it is a bit too gory (not Edward). Again, the mystery here is good, you feeling threatening stuff moving under the surface. The characters are all somehow tainted. No one’s perfect or perfectly friendly, there’s something in each of them, even secondary characters, that make you think there could be tragedy ahead, or they could just squeak through.

B+. Above average Avatar Art, that Warren Ellis something…

AW hell get ’em all.