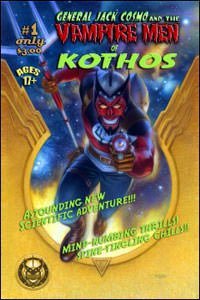 Have you ever wondered why Flash Gordon and Buck Rodgers weren’t a bit more salty? I mean seriously, if you were ripped out of your own time and thrown into an intergalactic war, you might have a bit more of a harder edge to you. That is exactly what General Jack Cosmo is. He’s cussing drug addled horny ass-kicking pop culture driven left wing version of Flash Gordon. And it really works! Jack is a human gets transported to the wide expanse of space and starts having wild adventures that the reader is dropped into the middle of, just like in classic pulp serials.

General Jack Cosmo comes from the mind of Aaron M Shaps and is not nearly as well known as it should be. It’s is a top notch indie book this people need to start searching out at conventions. Shaps’ uses the numerous inner monologues of General Jack as a soap box to send out his message on world views through snappy word smithing. Every once in a while, the profanity does seem to get in the way of the story but if you can look past that it’s well worth it.