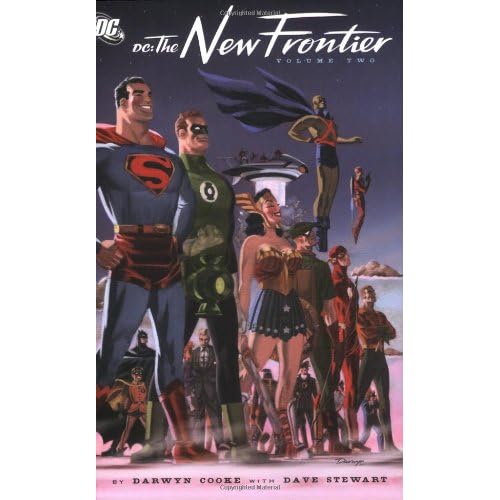 Okay, I’m looking forward to this. It looks to be a solid direct to DVD movie that has huge talent behind it.

The next installment of the DC universe original ANIMATED movies soars onto shelves when warner home video releases – justice league: the New frontier ON February 26, 2008!

BURBANK, CA, (November 27, 2007) Warner Premiere, DC Comics and Warner Bros. Animation are set to release the all-new original movie Justice League: The New Frontier on February 26, 2008 on DVD, HD DVD and Blu-rayDisc, distributed by Warner Home Video. Order due date is January 22, 2008. The original movie will also be available OnDemand and Pay-per-View as Well as available for download on February 26, 2008.

Based on the graphic novel by Darwyn Cooke and produced by Michael Goguen and animation legend, Bruce Timm, Justice League: The New Frontier is the epic tale of the founding of the Justice League. The animated film, written by Stan Berkowitz, features an incredible celebrity-laden voice cast including David Boreanaz, Brooke Shields, Lucy Lawless, Neil Patrick Harris, Miguel Ferrer, Kyra Sedgwick, Jeremy Sisto and Kyle MacLachlan and will be available on DVD for $19.98 SRP. There will also be a 2 disc Special Edition DVD available for $24.98 SRP which contains additional bonus features including a documentary about the pathology of the super villain and three bonus episodes from the Justice League animated series selected by Bruce Timm. All the content from the 2-disc Special Edition DVD will be Available on HD DVD and Blu-ray Disc.

The New Frontier takes viewers on an action-packed adventure, exploring the origins of the Justice League. DC Comics legends Superman, Batman and Wonder Woman are all featured in the film as well as Green Lantern, Martian Manhunter and The Flash as they band together to form the legendary Super team. Strangers at first, these very different heroes must overcome fear and suspicion to forge an alliance against a monster so formidable, even the mighty Superman cannot stop it alone. If they fail, the entire planet will be ³cleansed² of humanity.

³Sneak Peak: Batman: Gotham Knight² – One part anime, one part Caped Crusader, the result is a glimpse at the world of Eastern anime sensibilities combined with a Western tradition of Batman. A detailed look at the world of Warner Bros Animation, and how they joined forces with the renowned Japanese animators to create the highly anticipated anime film of 2008.

³Audio Commentary I² (featuring the talented filmmakers of New Frontier)

The 2 disc Special Edition DVD will feature even more incredible extras including:

³The Legion of Doom: The Pathology of the Super Villain²- This documentary will examine the early mythological archetypes of nemesis characters from a historical perspective, and see how the tenants of this rich history were adapted and woven into the Justice League stories. The bonus feature includes many of the talent included in Super Heroes United! As well as Jim Kreuger (Writer of ³Justice²).

1. Dark Heart. Alien invaders attempt to thwart the Justice League. The fate of the world rests on the shoulders of Ray Palmer, AKA The Atom.

2. To Another Shore. Wonder Woman learns of a plot to steal the powers of the 3,000 year-old corpse of The Viking Prince. It is up to the Justice League to make things right.

3. Task Force X – Four incarcerated villains are released from prison by Cadmus to undertake an impossible mission: steal a powerful mystic artifact from the JLU Watchtower under the noses of the League.

“Having the opportunity to take the unique work of such a legendary comic talent as Darwyn Cooke and create a small screen faithful adaptation of that style is one of the cornerstones in what we hope to develop for core and new fans alike as part of the DC Universe initiative on the Warner Premiere slate”, said Matt Bierman, Vice President Production, Warner Premiere.

³Darwyn Cooke’s New Frontier is justifiably considered a modern classic, and we at DC comics are excited to share this thrilling adaptation with the book’s legions of loyal fans. On Feb. 26, DC Universe Animated Movies will lead everyone across the New Frontier,² said Gregory Novek, Senior Vice President of Creative Affairs, Dc Comics.

³Following the huge success of Superman Doomsday, we are delighted to be releasing the second DC Universe PG-13 animated movie,² said Amit Desai, WHV Vice President, Family, Animation and Sports Marketing. ³Justice League: The New Frontier will certainly not disappoint fans who have been eagerly awaiting this next action-packed DC Universe installment.²

DC Comics, Warner Premiere, Warner Home Video (WHV) and Warner Bros. Animation (WBA) began the production and distribution of ³DC Universe,² a series of original, animated PG-13 movies in July 2006. This original, made for DVD, movie is part of the DC Universe series of animated PG-13 films written and directed by acclaimed comic book creators and animators and featuring recognizable talent. WHV will be the exclusive worldwide home entertainment distributor for all DC Universe movies which will include a slate of 2-3 action-packed films per year.