Geek-Girl gets collected and the Nerd-becomes-cool-Superhero trope gets flipped on its head!

Created and written by Sam Johnson (The Almighties, Cabra Cini) and illustrated by Carlos Granda (Grimm Fairy Tales, Charmed), in Geek-Girl vol.1: Lightning Strikes! (collecting the first 4-issue Geek-Girl Mini-Series) we meet attractive, popular Maine college coed Ruby Kaye. Ruby is a girl used to getting anything she wants; and when she overhears Trevor Goldstein, the resident college brainiac, talking about super-tech glasses he’s invented, she decides she wants them!

Ruby and her friend Stacey get Trevor and his buddy drunk, and Ruby wins the glasses off Trevor in a game of Strip Poker. She’s granted flight and super-strength, but – due to a flaw in the glasses’ programming – also lands herself with super-klutziness!  And this is just the beginning of the changes the glasses are going to wreak on Ruby…

“When we’re introduced to Ruby, she’s wearing the specs and is flying around in a super-hero costume, looking for crime, chatting to her BFF Summer on her cellphone, questioning if she’s ‘doing it right’; because she’s been at this a couple nights now and nothing’s happening,” says creator/writer Johnson. “But then something does happen. Right in front of Ruby, Neon Girl – Maine’s resident big-shot Super-Heroine – is blasted through a billboard by a mysterious new villain.

“Neon Girl is hospitalized by this extremely powerful, enigmatic woman, Lightning Storm, who seems to have come from nowhere,” says Johnson, “and a scared Ruby reveals how she got the glasses on a whim, how it was her friend Summer who made her a costume and came up with a superhero name for her – and how she doesn’t really know what she’s doing,” Johnson continues. “But this isn’t a point of view the no-nonsense Neon Girl has any time for; her attitude is that ‘Geek-Girl’ has super powers and sure dresses like a superheroine, so she needs to step up and stop Lightning Storm!” says Johnson.

And while Ms. Kaye’s trying to get her head around this, things have taken a hit in her social life; thanks to the side effects of the glasses, the only evidence she’s provided her ‘cooler-than-thou’ clique of her powers has involved knocking drinks over them – alienating her from all but Summer. Johnson concludes, “So with a social life in tatters and a new status she doesn’t really understand, Ruby has to try and take on an extremely dangerous force who’s taken down someone who’s like a hundred times better at super-heroing than she is. Let’s see how that goes…”

Geek-Girl vol.1: Lightning Strikes!, published by Markosia, is out in August, and available to Pre-Order now at www.kickstarter.com/projects/geekgirlcomics/geek-girl-vol1-lightning-strikes-pre-orders 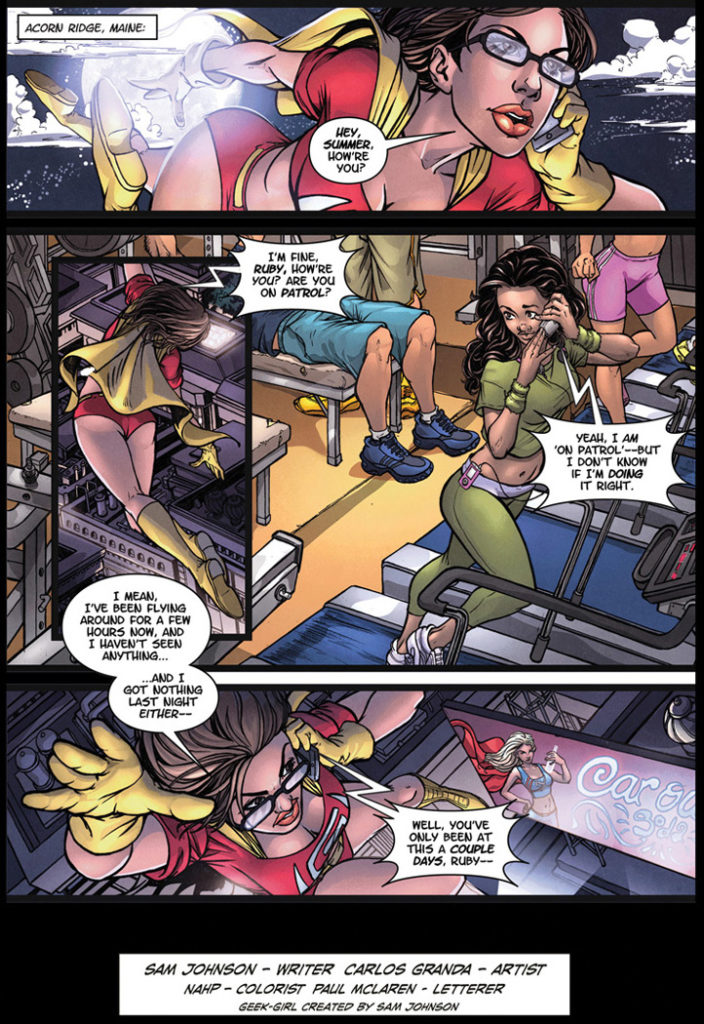 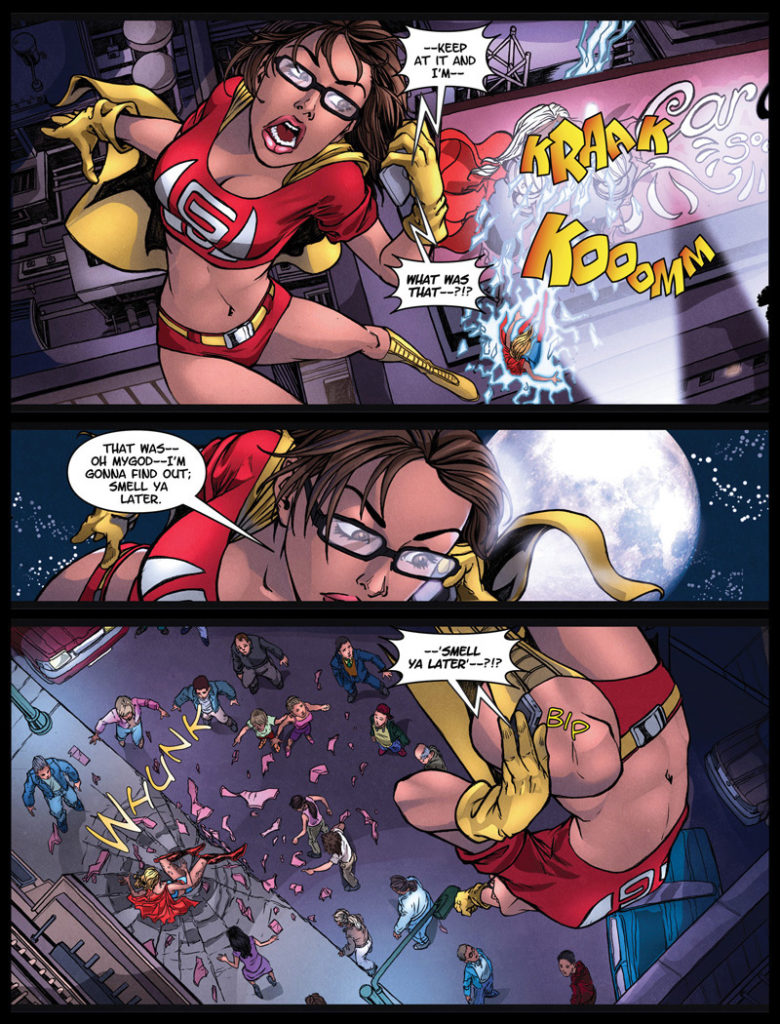 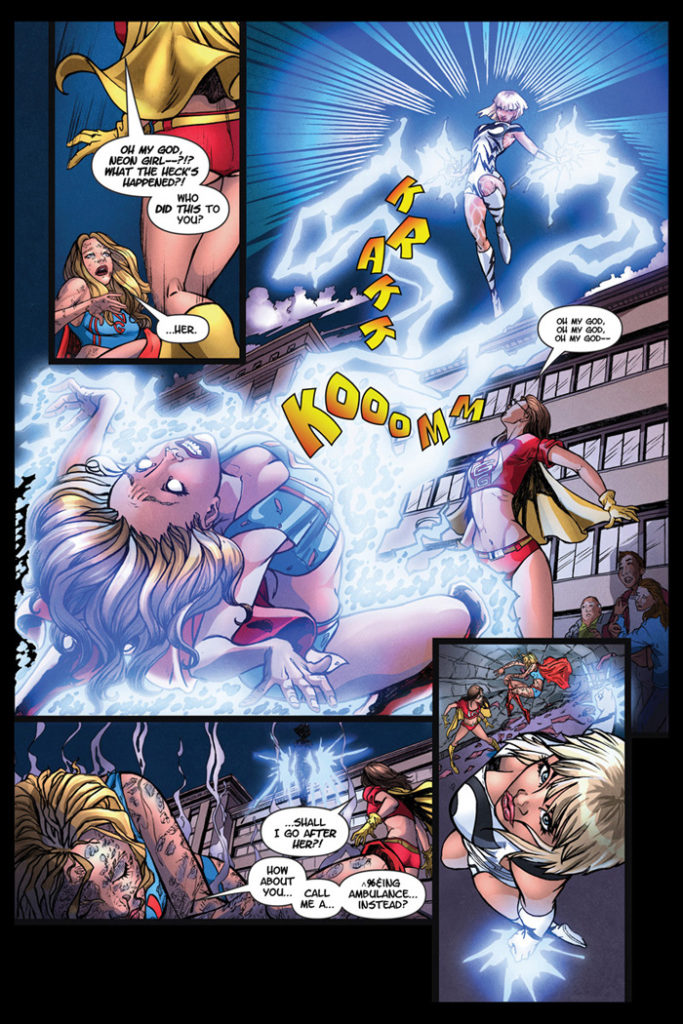 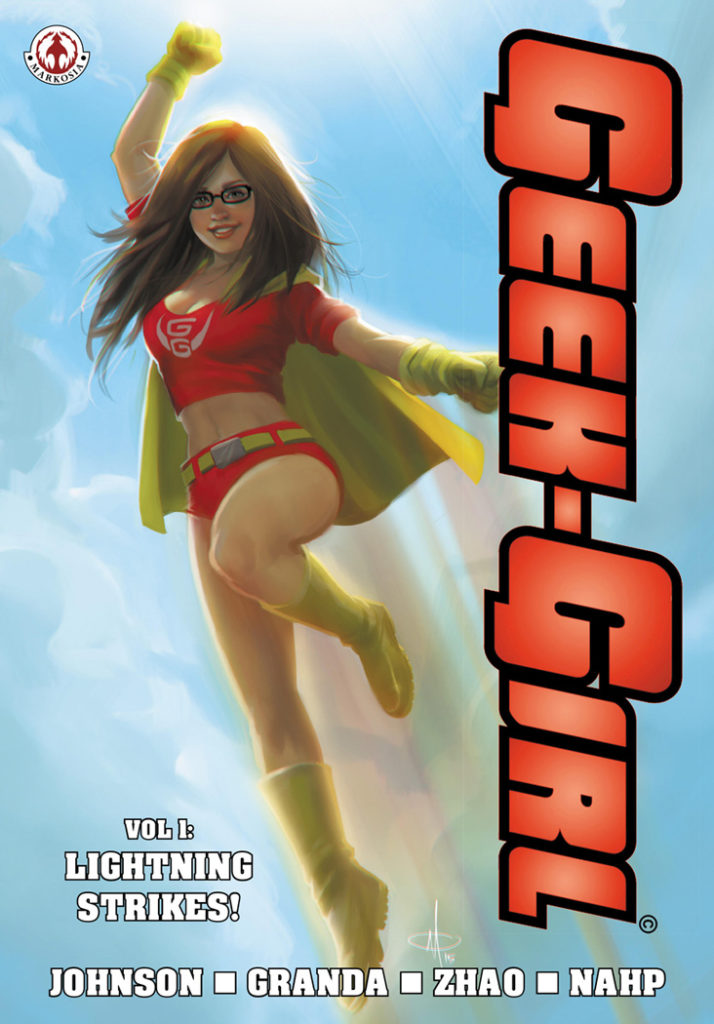