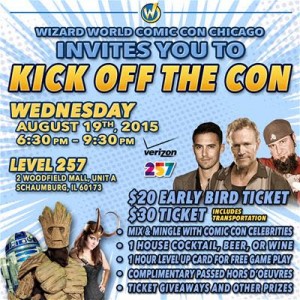 ROSEMONT, Ill., August 12, 2015 – Wizard World, Inc. (OTCBB: WIZD) today announced details of “ Kick off the Con,” the first official event of Wizard World Comic Con Chicago. The evening features some of the top celebrities, cosplayers, and artists in comic and sci fi entertainment on Wednesday, August 19, from 6:30-9:30 p.m. at Level 257 (2 Woodfield Mall, Unit A, Schaumburg, located between Sears and the entrance to Stir Crazy on the lower level, east side of Woodfield Mall).

Tickets for “Kick off the Con,” which include a one-hour Level Up card for free game play at Level 257, one house cocktail, beer, or wine and complimentary appetizers, are $20 “early bird,” $30 with transportation to and from Hyatt Regency O’Hare, available at wizd.me/KOTCChicago.

“Kick off the Con” is presented by Wizard World, Level 257 and Verizon.

Wizard World Comic Con Chicago is also the place for cosplay, with fans young and old showing off their best costumes throughout the event. Fans dressed as every imaginable character – and some never before dreamed – will roam the convention floor and participate in the famed Wizard World Costume Contest on Saturday night.

Inspired by NAMCO’s most famous creation PAC-MANTM and named for the legendary level 256 PAC-MAN TM ‘split’ screen that few have ever experienced, Level 257TM is a multifaceted urban-chic space where food takes center stage and play is encouraged. The experience is all about being social – through food, drinks, nostalgia, and a little bit of friendly competition. The venue will continuously evolve; creating a destination that turns convention on its head to celebrate the culture of play. The dining experience is orchestrated to bring contemporary food and spirits to old school play.

The venue enables guests to dine and play without borders! Food and beverage service is available everywhere, with attentive waitstaff stationed throughout the venue.

The 2015 Wizard World Comic Con schedule is available at: www.wizardworld.com/wizcon.html .