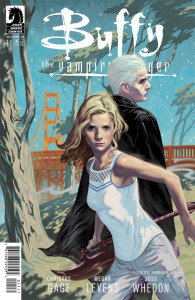 The rules of magic have been erased, and the book needs to be rewritten. Literally, there’s a book and the pages are blank. There’s a lot of power up for grabs, and the darker side of the supernatural world is looking for the advantage. The difference is that ever since Buffy and the crew spread the slayer power worldwide, the general public has become very well aware of all things magical and demonic. The San Francisco Police Department has a supernatural crimes division, and Spike is consulting.

Issue 11 has everyone down in the dumps and questioning their relationships… so, sounds pretty normal for Buffy and friends. Willow is entangled with her former spirit guide, Aluwyn (think Medusa without the crazy hair, and no stone-turning gaze), and trying to balance the relationship with her responsibility as the one to re-write the magic book. The aforementioned Spike is helping the SFPD track down the demon behind a string of body part thefts (someone’s making an army of flesh golems). Zander and Dawn have serious issues to sort through as Dawn, originally created as a magical construct who’s feelings and memories have been “reset” along with the laws of magic. Finally, Buffy is starting to wonder if happiness is something she unconsciously sabotages whenever her version of a “normal relationship” starts to get too comfortable.

I’ve been a fan of the Buffster since about halfway through season two’s original airing. I always thought the writing and the characters made the show better than its ridiculous sounding title, and I followed along as Whedon continued the story into the comics. For the most part, it all seemed to really work out well. Sure, things may have gotten a little out of control for a while, and even Joss Whedon has gone on the record as saying that without things like special effects budgets, he may have gotten a drunk on power, but things have settled down. The stories are back to being more personal, more about the individuals that make up the “Scoobies”, and that’s a very good thing. Some of the characters might not be totally in tune with their humble beginnings on the show (Spike’s a little more prone to banter then he is “arse kicking”), but we can get past that.

I like Season 10’s run so far. It’s great to be able to dip back into the Whedonverse, and so far Dark Horse has done a great job of holding onto the spirit of things. If they can keep it up, I’ll keep reading.