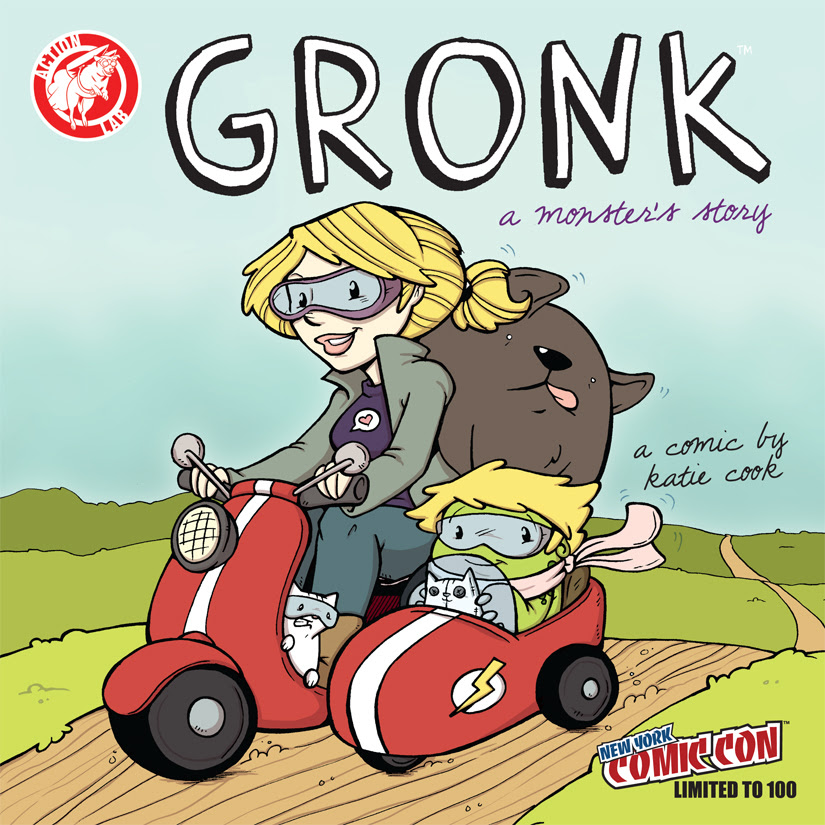 She’s written and drawn everything from Star Wars to Marvel. Now Katie Cook, the popular writer of IDW’s My Little Pony: Friendship is Magic brings her creator owned webcomic, Gronk: A monsters story to Action Lab Entertainment.Gronk tells the tale of a young monster who has turned her back on monsterdom (mostly because no one found her scary) and has become fascinated with humans. She moves in with her human friend Dale and her pets Kitty and Harli, a 160 lb. Newfoundland Dale wants to declare as a dependent to the IRS. Published weekly online since 2010, Cook has built up quite the following for her adorable bacon loving, pop culture obsessed creation. Cook, A Harvey Award nominated creator and fixture on the convention circuit built a career working on licensed properties like Star Wars and Lord of the Rings before landing the MLP series, based on the Hasbro toy line and cartoon series.“Gronk has always been a very personal project for me… I developed the character back in college YEARS ago and had always planned on doing something with her. It wasn’t until I kicked myself in the pants and started the webcomic that I started in on the journey that became “Gronk: a monster’s story”… a project that has seen me through years of my life. Every change my adult life has faced, leaving a comforting job for full-time freelance, becoming a mom (twice!) and more, I’ve always tried to get a Gronk strip up that week! It’s my true “me” creative time every week. It’s a strip that has grown with me as a person and a creator. ” Cook said. She added “I’ve been approached before about taking my self-published books to another publishing “level”, but it’s ALE that, in the end, I trust to do it. It’s a team that is made up of some of the nicest people I’ve gotten to know in comics and they really are trying to put together something special. I am thrilled to put Gronk (and myself) in their lineup. “Action Lab Entertainment President, Kevin Freeman said, “We’re thrilled to have Gronk as a part of our line. Katie is an up-and-coming star in the industry with a passionate fan base. We’re looking forward to a fantastic partnership.” Cook will be exhibiting at the 2014 edition of New York Comic Con in Artist Alley table C-10. She will also be signing a special limited edition issue Gronk: A Monsters’ tale at Action Lab Entertainments’ Booth #3044 on Friday, October 10th  and Sunday, October 12th from1-2:00pm. For more information, retailers can contact Kelly Dale at kdale@actionlabcomics.com. For press and conventions you can reach Jamal Igle at jigle@actionlabcomics.com. ABOUT ACTION LAB ENTERTAINMENT- Formed in 2010 with the purpose of pooling their collective talents into a single, powerful entity, the members of Action Lab Entertainment have countless years in multimedia publishing, design, and business.  Their first release, Fracture, was successfully funded through Kickstarter and since then they have continued their mission to produce high quality, genre-spanning entertainment.  Since its formation, the accolades for A.L.E continue to build on a daily basis.  Among its more popular titles are all ages material like the Eisner, Glyph, Shel Dorf Award nominated series PRINCELESS, NFL RUSHZONE (based on the Nickelodeon Television series), Jamal Igle’s MOLLY DANGER, Artist/ Writer Jeremy Dale’s hit series SKYWARD, and Gayle Middleton’s (My Little Pony, The Littlest Pet Shop) monstrously adorable VAMPLETS. Action Lab’s Mature Readers imprint ACTION LAB DANGER ZONE continues to push the envelope of comics entertainment with titles as varied as EHMM THEORY and Dan Mendoza’s over the top horror-comedy ZOMBIE TRAMP, THE FINAL PLAGUE and BO, PLUSHY GANGSTA.