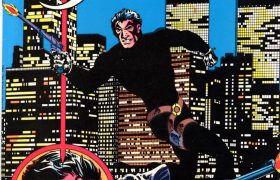 After successful Kickstarter campaigns to revive Mike Grell’s MAGGIE THE CAT and his collaboration with actor/writer Mark Ryan on THE PILGRIM, Grell’s Masterstroke Studios imprint is giving one of his most popular creations a massive new release: JON SABLE, FREELANCE.  JON SABLE, FREELANCE, the story of a former African hunter in the concrete jungle, was […]