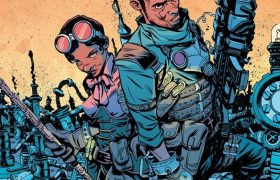 Image Comics is pleased to announce the return of the critically acclaimed series Bitter Root this February from Image Comics. Nominated for multiple awards including the Eisner and the Ringo—and hailed as one of 2019’s “Best New Series” by Entertainment Weekly—Bitter Root is currently in development as a film from producer Ryan Coogler and Legendary.  […]