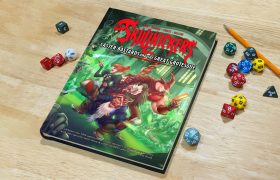 “I had the idea of putting together some kind of 10th anniversary special back in January and reached out to Edwin, Misty, and Marshall to see if they were interested and available. They were and we had the band back together…I started jamming on what the new story would entail and how we could deliver it, slowly turning the germ of an idea into what we’re now launching on Kickstarter as Skullkickers: Caster Bastards and the Great Grotesque.”