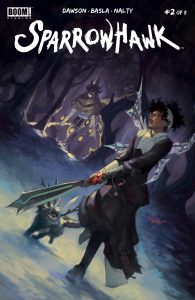 Trapped in the beautiful, deadly world of Faerie, Art realizes that there is only one way out. To survive, she has to fight. To escape, she has to win.
———-

The Unseelie Queen has her eyes set on expanding her rule into the human world. To that end, she’s pulled young Artemisia into the land of the Fey, taken her human form, and crossed back over. Now Artemisia is stranded in Unseelie territory, surrounded by creatures both strange and hostile. Her guide is sort of a winged sabretooth bunny named Crispin, who apparently has his own motivations for helping Artemisia find her way home. His best advice so far is to kill everything she comes across, because in the land of the Unseelie Court you keep the power of that which you kill.

Now Artemisia has killed, and it’s changed her in more ways than can be seen in a mirror. What she’s becoming remains to be seen, but in the end the word “human” may no longer apply.

In the realm of dark fantasy, there’s never really been a shortage of entries exploring the land of Faerie. The bizarre realm can be traced all the way back to the works of Shakespeare, and Alice’s first step through the Looking Glass. Lately the Fae have found their way into more modern tales of urban fantasy. I think that what appeals is the dark beauty of the place and the danger that comes with it. See, as it happens elves aren’t all rosy cheeked cherubs, hanging out in trees baking cookies. The Fey live by a different set of rules, and it’s in that framework that I think we find the appeal.

In Sparrowhawk, creator/writer Delilah Dawson wasn’t satisfied with another “Alice”, haplessly stumbling about and relying on the good will of outside forces to get her out of trouble. Instead, she’s created a different sort of heroine in Artemisia. Starting out as an innocent, it doesn’t take her too long to embrace her new situation- if not eagerly, certainly without much in the way of foot-dragging. Who knows, maybe if Alice had picked up a wicked looking sword, her adventures might have looked a little different. Maybe Dawson’s greatest accomplishment in this story is just in her take on the attitudes and motivations of the denizens of Unseelie. While they most certainly aren’t big on the warm and fuzzy, Dawson gives a little more perspective on their lives, showing that the immortal creatures can only be what they are, and even predators have a purpose.

The artistic team of Matias Basla, and Rebecca Nalty is up to the challenge of creating the Faerie realm. Basla’s illustrations focus mainly on the characters populating the world, leaving much of the background to the imagination. It’s all there, but mostly in shapes and forms rather than heavy detail. In his character designs, Basla has established some interesting looks. Artemisia looks like a proper Victorian young lady, all layered skirts, laced bodice… and newly sprouted faerie wings. Crispin is a visual anachronism, with a vaguely cuddly bunny appearance, completely derailed by the fangs and blasé attitude about trivial things like murder. Combined with Nalty’s relatively straight forward color palette, the overall affect has quite a bit in common with the style of Mike Mignola.

A deserved nod goes to Jim Campbell, whose lettering does a good job giving voice to the various Unseelie citizens. Using differences in color to set apart the speech of the characters is a subtle trick, but it works. Likewise, just a slight change in type font goes a long way toward accentuating the “otherness” of some of the stranger beings.

Sparrowhawk is a fine new addition to the fantasy genre, made more so because most comicbook fantasy titles are reserved for the likes of barbarians named after late night talk show hosts and sword slinging maidens in chainmail bikinis. What I’m most interested in so far is finding out what’s going on with the Unseelie Queen in the mortal world… If Artemisia is being so drastically changed by her environment, who’s to say that Her Majesty (Mab?) isn’t suffering the same fate? 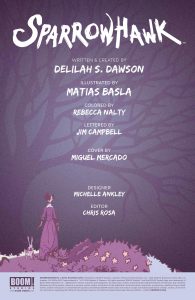 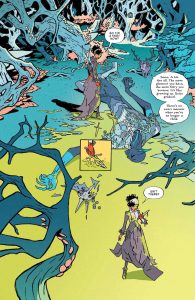 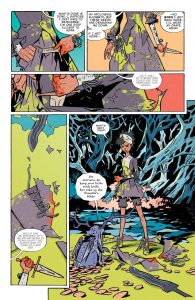 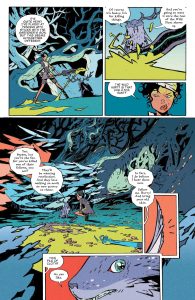 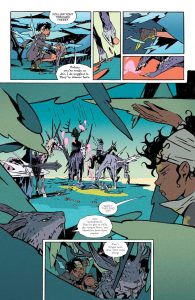 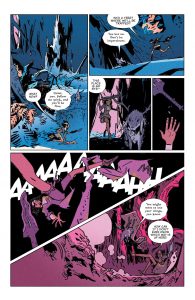