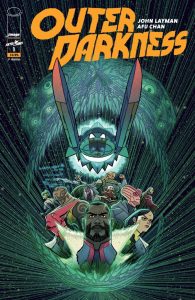 PORTLAND, OR, 11/08/2018 — Image Comics and Skybound Entertainment are thrilled to announce that the debut issue of John Layman and Afu Chan’s sci-fi horror series is being fast-tracked for a second printing in order to keep up with customer demand.
In OUTER DARKNESS, humanity successfully colonized the galaxy. But the vast reaches of space are anything but safe. So when Captain Joshua Rigg and the crew of the starship Charon set out on a desperate rescue mission into the Outer Darkness of space, they’ll encounter demonic possessions, hauntings, and other flavors of cosmic horror. Because, quite simply: out in the abyss, everything wants to kill them.
“As I said when I introduced OUTER DARKNESS, I wrote it because it was exactly the sort of comic I would want to read,” said Layman. “But nothing is a sure thing, especially in comics, so it’s especially gratifying to see that this is the sort of comic other people want to read as well. I’m grateful for everybody who’s picked up the book. And if you liked the first issue I’ve got good news: Issue Two is even better.”
OUTER DARKNESS #1 will remain available for purchase across all digital platforms, including the Image Comics website (imagecomics.com), the official Image Comics iOS app, Comixology’s website (comixology.com), iOS, Android, and Google Play.
OUTER DARKNESS #1 2nd printing (Diamond code: SEP188838) and OUTER DARKNESS #2 (Diamond code: OCT180234) will be available on Wednesday, December 12th. The final order cutoff deadline for comics retailers is Monday, November 19th.

“You never know where OUTER DARKNESS is going to go… Afu Chan’s storytelling is smooth and tight, which helps balance the more insane moments and turn OUTER DARKNESS into something truly special.” —Nerdist

“OUTER DARKNESS #1 is a cinematically widescreen comic with the promise of spacefaring horrors to come. Whether this horror comes from outer space or from within the ship itself is a saga I’m looking forward to reading.” —Comicon.com

“Both of these powerhouse creators are on hand to offer the world a genre-bending trip through space. Wholly unique, and an interesting addition to the sci-fi landscape in the medium.” —The Beat

“For fans of interstellar horror—and everyone who appreciates good art—OUTER DARKNESS is a must.” —Paste Magazine

“Aesthetically on point and literarily inspired, diverse, and much needed.”
—Doom Rocket

“Layman and Chan are both on top of their game in unique, fun ways here.” —AiPT!

“Afu Chan and John Layman have delivered an impressive debut issue that manages to be a little bit of a lot of things, brought together in a cohesive and engrossing world populated with captivating characters and compelling drama.”
—Newsarama