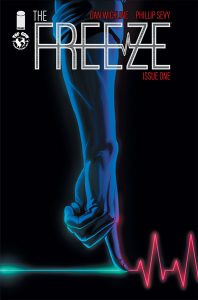 PORTLAND, OR — Writer Dan Wickline (30 Days of Night, SHADOWHAWK) and artist Phillip Sevy (Tomb Raider, THE TITHE) team up for THE FREEZE, an all-new science fiction series coming this December from Image/Top Cow.

The entire human population is frozen by a mysterious global event…all except Ray, and only he has the power to unfreeze them. Now—with the fate of the world in his hands—he must figure out what is going on, how to set things right again, and answer the question: does everyone deserve to be saved?

“THE FREEZE is a post-apocalyptic survival story where the biggest danger is man’s true nature,” said Wickline. “We strip the world down to one decent person and then give him the power to rebuild society from scratch, not knowing if those he awakens will benefit the new world or indulge their darkest inclinations. It’s an intriguing concept to explore as a writer, and Phillip is just hitting it out of the park with his art.”

“Great sci-fi is about taking a cool concept and using it as a vehicle to examine the choices, attitudes, thoughts, and prejudices we, as people, have,” added Sevy. “The premise and its execution in THE FREEZE is what drew me to the project and keeps me fueled as I work on it. I can’t wait for people to read it—Dan’s written a great book!”

Advance praise for THE FREEZE:

“Wow! It so rare to find someone who can do the end of the world in a way we have not seen. But Dan Wickline and Phillip Sevy have pulled it off with their wicked apocalyptic game of freeze tag that has me wanting more…a lot more! Wickline’s usual sense of character is on full display while Sevy’s art is crisp and cinematic and serves the conflict beautifully. This is fantastic, intriguing stuff!”
—Adam Marcus (director of Jason Goes to Hell: The Final Friday)

“THE FREEZE is kind of like… what if Left Behind was good, and less religious? A
fantastically fresh concept that begs to be explored, expertly rendered with art that’s surprisingly vibrant and dynamic for a book about people that literally can’t move.”
—Ryan Cady (INFINITE DARK)