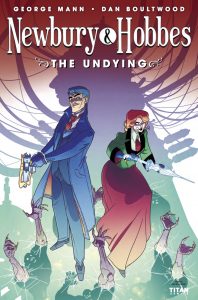 Writer George Mann (Dark Souls, Doctor Who, Warhammer 40,000) brings his steampunk mystery novels to comics in a new story for their 10th anniversary, alongside artist Dan Boultwood (It Came!, The Phoenix)!

Whether dismantling rogue automata, uncovering plots against Queen Victoria, or putting down infestations of zombies – it’s all in a day’s work for Sir Maurice Newbury and Miss Veronica Hobbes, agents of the crown!

Plus: a brand-new Newbury & Hobbes prose short by George Mann, serialized in each issue!
———-

When the Crown is faced with the unknown, as often as not the investigation falls to Sir Maurice Newbury and his assistant (I’ve translate that to “minder” or “sitter” in my head) Veronica Hobbes to resolve. When their attention is called to multiple mysteries simultaneously, it’s only a matter of which piques Sir Maurice’s curiosity the most. On the one hand, there’s the matter of a series of abductions and the strange masked cultists apparently behind them. On the other hand, a bizarre corpse that doesn’t quite fit a description as “human” has been dredged up on the property of Professor Archibald Angelchrist, friend to Newbury and senior member of Her Majesty’s Secret Service. With no details regarding the corpse other than that it should appeal to Sir Maurice’s “sense of the macabre”, it doesn’t take a leap of the imagination to determine which direction the investigative team of Newbury & Hobbes might go.

Steampunk is a subgenre branching off from the fantasy & sci fi tree that’s seemed to hover at the fringes of popularity over the years. It’s attained enough status among fans to have spawned whole conventions dedicated to its name, full of cosplayers and devotees as loyal as any “Trekkie”. There have been many books and stories written, traced as far back as the work of H.G. Wells. Steampunk stories are generally set in Victorian era England (however my personal favorite so far has been The Lotus War Trilogy by Jay Kristoff, set in feudal Japan), and take advantage of the period’s sense of exploration, mystery, and progress. When it’s all done well, Steampunk can be the perfect melding of history, mystery, intrigue, and the fantastic.

Titan Comics has accepted the challenge of adapting characters created by George Mann in a series of novels featuring the dynamic duo of Sir Maurice Newbury and his “feisty assistant” Veronica Hobbes (check out The Affinity Bridge for their first published adventure… it’s even got a soundtrack album!). Luckily, Titan had the foresight to go straight to the source for this story… George Mann himself. What better way to explore established characters in a new medium than to have their creator onboard as writer. Unfortunately, I can’t say that I’ve read any of the Newbury & Hobbes novels, so I can’t really speak to how well they’ve translated into the comicbook format. What I can say is that I have every intention to dive into Mann’s books now that I’ve had this comic as an intro. The characters are interesting and well-thought out, with Newbury standing in as a more dashing and swashbuckling Sherlock Holmes, and the more thoughtful but no less determined Miss Hobbes as his partner.

For his part in the equation, Dan Boultwood delivers a top notch body of work. His art is crisp and clean, and he handles it all with a good eye for dynamic action. The book opens up with fisticuffs, and Boultwood leaves no doubt that not only is Sir Maurice capable of handling himself against a group of masked cultists, but also shows Miss Hobbes to be equally versed in the defensive arts- I see palm strikes, judo throws, and a good ol’ fashioned right cross in those opening panels. The other nice touch is in conjunction with the narrative text boxes. Where Mann has used Miss Hobbes as the point of view character telling the story, Boultwood has matched her facial expressions to her words- slight spoiler, Miss Hobbes doesn’t always approve of Sir Maurice’s methods, his devil-may-care attitude, or his choice of friends (I’m also pretty sure she’d be lousy at poker).

Rob Steen’s work in the lettering goes largely without flair or flourish, except in the sound effects and most notably in the text boxes marking the story’s locations (London, Oxfordshire, & Buckingham Palace to point out a few)… I might be inclined to think that Steen was a little restless after his work in the relatively straight forward dialogue font, and decided to really go for it “between the lines. When you consider that the letterer’s first and foremost job is to tell the story without drawing too much attention to the text (and away from the art & story itself), Steen’s done his due diligence and totally deserves a chance to play around a bit where he can.

This latest outing for the mystery solving duo of Newbury & Hobbes might be their first so far as some readers are concerned, but it’s in no way restricted to existing fans. Rather, this is a pretty solid introduction to an established series.

Good news for me… I seem to be in between books at the moment. 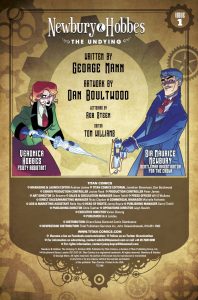 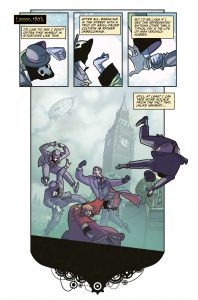 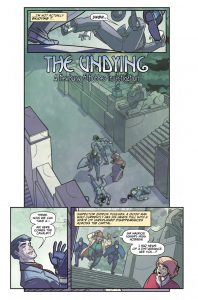 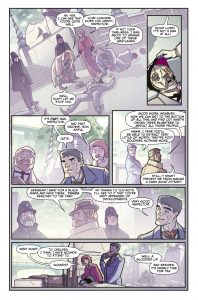 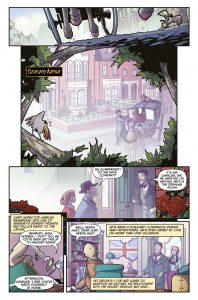 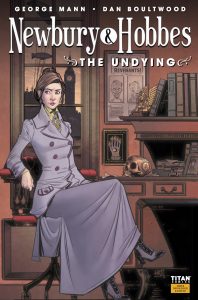 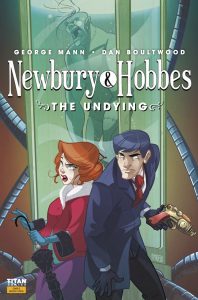