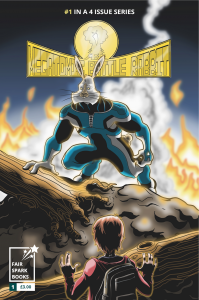 As Megatomic Battle Rabbit explores the green and blue mud ball planet his ship has helpfully stranded him on, two primitive human creatures, science fiction fan Dexter and his friend Henry, investigate a mysterious blue light that fell from the sky
———-

Dexter Draper is a dreamer. At the age of 12, this isn’t really such a strange thing, as he prefers to let the very boring (often depressing) real world fade into the background. Time is much better spent indulging in the made up worlds of fantasy found in comic books and looking through his telescope for a glimpse of the incredible. Sure, aside from the odd comet there generally isn’t much to see out there among the “pinholes in the curtain of night”, but what if…?

Megatomic Battle-Rabbit is a pilot. We have no idea how old he is, but we do know that he’s in a bit of trouble. His ship has been damaged, and he’s in for a bit of a bumpy landing (i.e. crashing) near the town of West Bromwich. Megatomic manages to the control his landing enough to keep his ship more or less in one piece, but his efforts are made moot when his computer points out that their advanced technology mustn’t fall into the hands of a planet full of primitive ape descendants. The ship’s self-destruct is activated, and Megatomic is left on his own… a stranger on a strange planet.

Stu Perrins has a knack for taking the odd and off-kilter, and making it his own. So it was with a chuckle and a “Oh, I gotta read this” that I greeted the opportunity to check out Megatomic Battle-Rabbit. Seriously, what else do you need? How about a spin on the classic “fish out of water” story? Sure, there’s an alien stranded in a small England suburb. He’s out of place and far from home, but he’s not the only outsider in this story. Don’t forget about young Dexter Draper. Where 12 year old boys do tend toward daydreams of Daring Deeds and Bigger Things, they don’t all spend most of their time star-gazing or running out into the countryside every time they see something that could be a UFO. In his own way, Dexter is as much an outsider as Megatomic, and his isolation could make for some great story fodder given that he’s not far from home or lost in space.

And as far as anthropomorphized giant bunny rabbits go, Megatomic is rendered as a pretty impressive specimen, thanks to the work of Israel Huertas. This first issue doesn’t give much by way of action to let the big fella strut his stuff, but what there is makes for a promising introduction. The shading and texturing effects are pretty slick, lending depth to the pictures on the page. Also, I just kinda like the design… He’s a giant rabbit who looks like he’s never missed a workout (no, not even leg day), running around the countryside in a spacesuit. Not since Usagi Yojimbo has a bunny looked so ready to lay the smack down on an unsuspecting bad guy.

That’s what the book needs… a bad guy. Well, this is only the first issue. By the end, Megatomic and Dexter do meet up. After that, we’ll have to just wait and see where it goes, and who really winds up being the fish out of water.

Megatomic Battle-Rabbit looks like it’s going to be a solid “all ages” kind of book. Parents, please make sure you have your kids’ permission before reading. 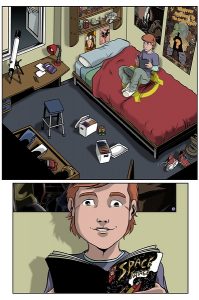 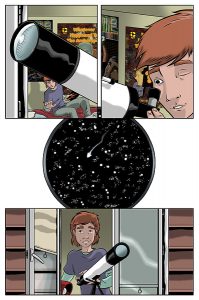 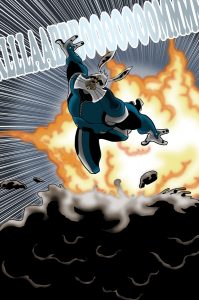