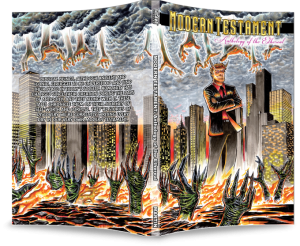 Biblical beings, although ancient and iconic, struggle to be understood and find their place in today’s society. Humanity has changed since their creation during the days of antiquity, and they along with it. These tales chronicle them on their journey of self-worth and purpose. They’re stories of discovery we’re currently writing every day in our very own Modern Testament.
———-

“What is He Good For?” gives a look at War, the man-made Horseman, kicking back and enjoying some R & R aboard a cruise ship that’s about to be sunk in contested waters. While waiting for the explosive outcome, he approaches a disabled veteran vacationing with his family, to un-ironically thank him for his service. Upon learning the fate of the cruise ship- and that of his family- the soldier makes War a pretty sweet deal: spare his family and the ship in exchange for continued service.

“The Abandoned” gives a new perspective on stories we’ve all heard, about angels running around “begetting” with humans. These trysts have been romanticized to no end, but would it be that awesome? These pairings don’t last, and they leave behind progeny caught somewhere in between human and divine. Has anyone else ever bothered to wonder what it might really be like to be the child of such a union? How could any son or daughter hope to live up to that kind of parent’s example?

In “Better the Devil You Know…” Jack, a complete failure of a man, takes his many shortcomings out on his wife and child. When the Devil himself shows up to make him an offer, he’s got every reason in the world to ignore the good sense that God gave him.

“The God Complex” puts Professor Roger Florence in front of an audience made up of his peers, scientists and theoretical physicists from all over the world. He’s about to proudly lay down his newly discovered “theory of Everything”, when he’s faced with the possibility that he might not know so very much after all.

“… Than the Devil You Don’t” brings Jack, a lifelong loser who experienced a sudden turn of fortune, face to face with his fate when he is forced to confront his inner demons- and maybe an outer one as well.

Finally, in “At Death’s Door”, what’s a Horseman supposed to do when he’s actually the least fearsome of the Four? If you’re Death, you dive into daytime soap operas and try to eat your way onto a reality TV show. When the clinically depressed Rider of the Pale Horse gets a visit from Cain, the First Murderer, it all becomes a matter of perspective.

Much like “Aesop’s Fables” and “A Life in Pieces”, each story in Modern Testament’s four issue run can be read on its own and in no certain order for its meaning to be found. For that matter, there’s nothing saying that each story has to have some deeper meaning. Readers can dig deep into the layers for hidden truths, or can carry the mantra “shut up and entertain me” in their hearts and glean nothing from Frank Martin’s work but a hankering for some takeout food and an idle query about what Peter Dinklage is up to lately… That’s the beauty of an anthology. The possibility that Martin might’ve had something more in mind is something that doesn’t have to play a role in your enjoyment of his series.

And enjoy the stories in this collected trade edition I have. When it all comes down to it, Frank Martin has taken his chosen subject material- established scripture to some and myth to others- and presented age old situations with a modern sensibility. Most have heard the parables and stories, in testaments both Old and New, in one form or another. While it might have occurred to us that the Devil would appear as a dapper and successful businessman, it might be a little less obvious that he’s not necessarily the heartless and conniving serpent that some doctrines would have us believe. And what do you think God’s response would be to the world of Theoretical Physics?

Without the work of the artists in play for Modern Testament, Martin’s writing might not have had as big an impact. Thankfully, the likes of San Espina, Martin Szymanski, & Anthony Pugh (illustrations), backed up by Adri Pratama, Miguel Marques, & Julian Dominguez (colors) were available. With their input, Lucifer can be both charismatic and fearsome, and the likes of Death himself can actually be kinda tragic and sad.

It’s the work of the entire team, from Frank Martin’s writing to the many artists who have put pen to paper for the stories in this anthology, that have produced a Testament for these Modern times. You may not find a hidden truth of your very own, and that’s okay. Modern Testament doesn’t need to be recognized as a collection of stories posing philosophical truths or possibilities. Shows like The Outer Limits and The Twilight Zone will live on forever in the collective consciousness, to reflect what we should have learned about ourselves by now, but but often stubbornly refuse to.

Despite our single-minded determination to see ourselves at the top of the food chain, “To Serve Man” will always be a cookbook. 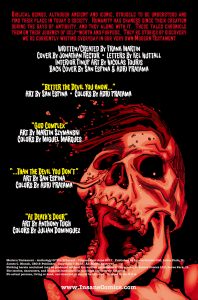 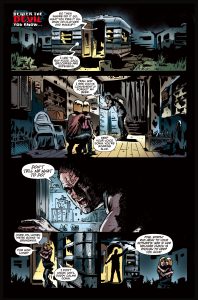 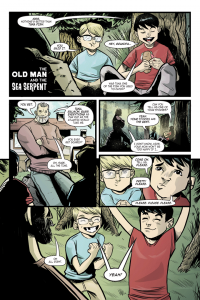 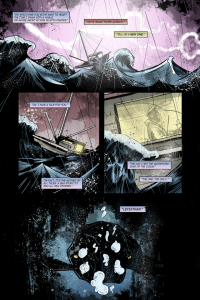 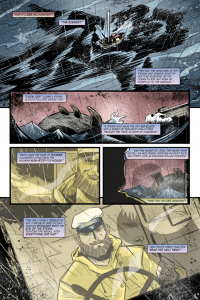