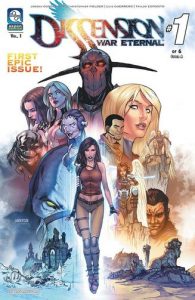 In the not so distant future…
The U.S. has spent several years embroiled in a conflict with the invading forces of China. In the war zone of the American Southwest, small bands of freedom fighters have formed to help guide refugees away from the destruction. Isabel Vasquez, known to her squad as “Delphi”, has been leading rescue missions inside the combat zone for years. Escorting those displaced from the war has fueled her faith that she is making a difference. But now that faith is increasingly tested by reoccurring nightmares of a coming apocalypse. She fears the war is only the beginning of a great threat…one that promises to bring humanity to the brink of
extinction!

Unbeknownst to Delphi, a band of renegade angels has fled Heaven seeking a new refuge. The Earth has become their new home, where they view humanity as a plague that must be purged. As their path forges ahead toward global genocide, it is yet to be decided if Delphi and her growing visions of a global Armageddon can help stop them in time. 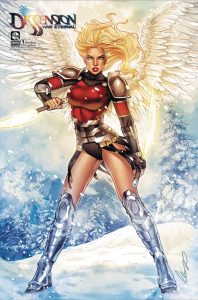 A longtime friend of ThePullbox, Jordan Gunderson, has put out his first creator-owned property and it’s everything I hoped it would be!

The story opens in the frozen lands of Alaska, where the tribal elder is telling the story of his people. They crossed the land bridge from Russia to Alaska to become the first Americans, but along the way, they encountered what they believed to be shape-shifting demon gods.

The elder goes through the tradition of reciting the oral history of his people. As far as a storytelling intro goes, I thought this was genius. Gunderson and Fielder are able to get through the intro to the story in a fun way by employing a forgotten tradition, with a visual twist, and in doing so create a scenario I don’t remember seeing in comics before. Nice job. 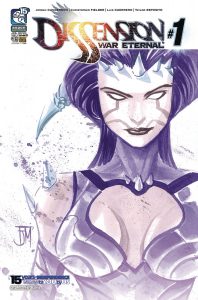 As an intro to a bigger story, they hit the nail on the head. Since this is issue # 1, we get some more introduction, a few names, and find out America is being invaded in the Pacific Northwest. I had to stop myself from yelling “WOLVERINES!” at this point (If you don’t get that reference, then brush up on your 80s movies).

We only get tiny morsels of what we can see is a huge cosmic spanning story. I’m looking forward to reading issue #2.

What is really on display here is the art team of Gunderson and colorist Luis Guerrero. Their blend of color and illustration create visuals that are some of the best I’ve seen in modern comics. I’m not kidding, Jim Lee should be worried about losing work (not that he needs to worry about that) to Gunderson and Guerrero. Aspen Comics better have these two in a firm contract.  Working so much for Aspen, it was easy to see the influence Michael Turner has on Gunderson’s past illustrations. With Dissension, it feels like Gunderson is bringing more of himself to the page. Pushing himself past his mentor to create something all his own, and beautiful.

The colors of Luis Guerrero are the perfect pairing to Gunderson’s pencils. When set in ancient Alaska, you can literally see the cold. I’m born and raised in Wisconsin, I know the color of cold. The visions of a blizzard that makes you think, “If we don’t get out of this we’re going to die.” then feeling the warmth of a fire. That’s what Guerrero accomplishes. Colorist are too underrated in the comic world, in my opinion, partially due to the numerous hacks I’ve seen in the industry. Luis Guerrero is no hack. He’s an artist and storyteller who knows how color and light can help bring a reader into the world of his making. Just phenomenal work happening here.

Bottom line: Come for the art and stay for the story! Dissension: War Eternal is shaping up to be one of the most intriguing and beautiful books of 2018. 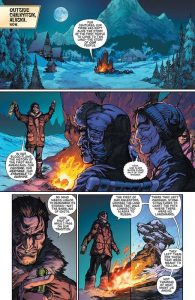 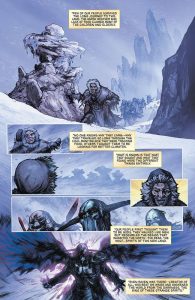 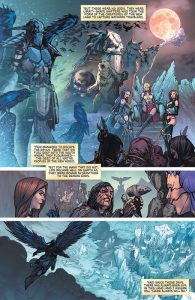