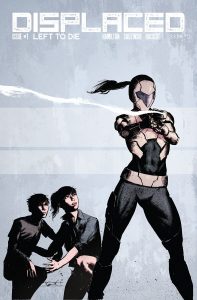 Imagine. Imagine getting the escape you have dreamed of. To be swept off your feet and taken on a grand journey with no limits. No restrictions, living the life you want and not the life that had been handed to you. This isn’t that story… This story is the worst possible version of that. Getting swept off your feet to be taken on a scary journey, never knowing that you will get to go home, to see your family. Forced to make decisions that will traumatize and make you the worst version of yourself. This is that story. This is… Displaced.
———-

When Eliza got out of bed that morning, she had the feeling that the day was going to be “her day”. It was all going to come together, and everything started out great. Her mom gave her some extra money for lunch, Alex asked her out on a date, and a trio of high tech armored soldiers approached her with the classic “come with me if you want to live” line. Okay, that last part seems a little off, doesn’t it? That’s how these things happen in stories: a main character is just making their way through life when from out of nowhere, Change strikes.

In the opening issue for his very first comicbook, creator/writer Kevin Hamilton throws around some information for us to ponder, and a few hints at things to come. As a labor of love, Displaced opens with a fairly slow pace that establishes the “just another day” vibe. We’re shown Eliza at home with her Mother and brother Jonathan, getting ready for work and school, eating breakfast, going to work/school, sitting through a history class… pretty normal stuff. We’re told that Eliza and Jonathan’s parents had a fight the night before, and that Mom was a little extra nice that morning to cover it up. It’s about ten pages in when the story kicks into gear. From there, it’s a series of fast moving panels following Eliza and Jonathan as they’re bounced in and out of danger like a pair of pinballs.

The action is handled pretty well by Jeferson Sadzinski, running the gamut between shootouts and fisticuffs as rescuer and attacker fight it out over… we’re not really sure what the bad guy wants, but he wants it bad and he seems convinced that the brother and sister can get it to him. Whatever “it” is, Sadzinski does a good job of running through the issue’s stages, from the ordinary “day in the life” phase, into the “shoot ‘em up”, and on to the climax. As plot points are dropped into the mix, Sadzinski is kind enough to provide pauses for character reactions (how he managed to convey an emotive pause through a face concealing helmet is beyond me, but I’m pretty sure I caught one) amidst the chaos of the ongoing fight scene.

By the end of the issue, I think I have a handle on some of the points Kevin Hamilton is working toward, none of which I’m going to share here… my job is just to give my thoughts on the book’s presentation, not interpret it. That’s your job as a reader, and this is a title that should be read by anyone with an interest in supporting independent comics. While there are some growing pains to get through, Displaced is a solid sci fi concept with some interesting spins on its story. 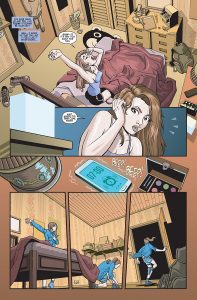 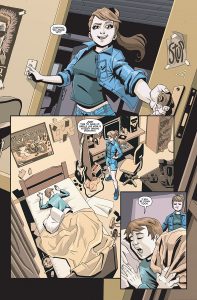 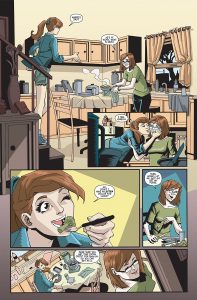