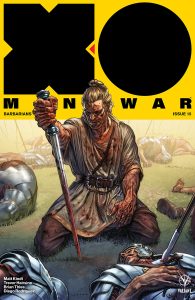 As HARBINGER WARS 2 besieges the Valiant Universe – and X-O Manowar along with it – Aric of Dacia cannot escape the flames that now threaten his future…or the shadows that cloud his past. Before space… Before the armor… Return to the apex of Visigoth conquest as a younger, brasher Aric and a sword-wielding grifter set off on a continent-spanning quest for fortune, glory, and power! From the bloodstained sands of the gladiatorial arena to the dunes of the Arabian Desert, meet the man who would become the warrior-king of an alien civilization – and our own world’s most powerful hero – as he sets out to seize his destiny once upon a time in a land of faraway kings and unrepentant conquerors!
———-

With war overtaking the globe, Aric of Dacia finds himself looking for some kind of inner clarity. Prince, revolutionary, hero, and king, Aric has fought in many wars and won countless titles. Currently the wielder of Shanhara, the sentient armor through which he possesses unimaginable power, Aric thinks back to simpler times. In this case, those simpler times will take him back to when all he had to worry about was war against the Roman Empire.

The beginning of a new story arc is always a great time for the initiated to check out Valiant’s flagship title, X-O Manowar. Regardless of the twists and turns writer Matt Kindt has run Aric through in the past, it’s become something of a staple to jump on board and see what new trials he finds for the tested Visigoth Prince. This time around, Kindt presents a more introspective Aric, as he thinks back to when he never had to question who he was, never had to doubt his cause. With a second Harbinger War on the horizon, Aric resists the urging of Shanhara, struggles against the urge to leap once more into the fight, as though he wants to be sure he knows which side is the right one before committing the awe-inspiring power of X-O Manowar.

If you’ve been reading Aric’s story for any length of time, you’ve seen him pull off some pretty impressive feats of strength and power. He’s overcome every enemy set against him, to the point that it’s become something of an inevitability. That’s why in this new arc, I think it’s great that we’re being taken back to a time before Aric’s captivity among the alien Vine, before he and his people were taken away against their will to live among the stars. Before Aric’s bonding with the alien artifact known as the armor Shanhara, when he was just a young warrior trying to do the right thing for those closest to him.

Kindt has taken Aric out of the role that we know, and placed him in one much more mundane, just one out of many. Kindt also introduces a new character, the Zambian laborer Sabbas, and shown yet another face of life in the chaotic time of 393 A.D. Sabbas’s role in what’s ultimately Aric’s story has yet to be shown, but having the central character take a step to the side for a minute or two is a pretty major step. It shows a willingness to approach Aric’s story from a new angle, maybe putting a fresh perspective on Aric’s true motivations for the fights to come. It’s the latest in a run of creative leaps taken by Kindt and the folks at Valiant.

One thing that isn’t all that new for the series is the quality of the artistic team working away on X-O Manowar. The illustrations by Trevor Hairsine are outstanding. It’s in his ability to display emotion in the features of his characters, from Aric’s self-doubt to Sabbas’s look of serenity- not acceptance- in the face of adversity, that Hairsine carries this not particularly action-heavy issue. The supporting work from inkers Brian Thies and Stefano Guidano, and colorist Diego Rodriguez solidify the look of X-O. Overall, their efforts bring the world of the Roman Empire to life. The vivid line work of Thies & Guidano provides the sharp contrast needed to keep all of Hairsine’s detailed figures distinct, while Rodriquez maintains the look and feel of the environment with a color palette held mainly to muted earth tones and a dusty overlay.

Dating back to the 80’s and 90’s, X-O Manowar has always been a staple of the Valiant Universe. While that’s a very good thing, it does present challenges to any creative team. Aric and Shanhara have toppled empires and single-handedly (heh… some of you got that) quelled invasions. Seeing Aric removed from his position of power, watching him back in his formative years as a young Visigoth warrior before he’d ever heard of the Vine or Shanhara armor, brings him back into focus and makes him a more sympathetic, relatable character.

It’s tough to feel concern for a guy who can crush a tank between thumb and forefinger. Showing him, arguably, at his weakest helps. 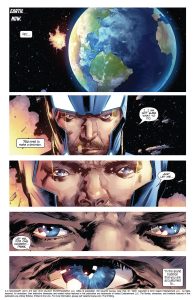 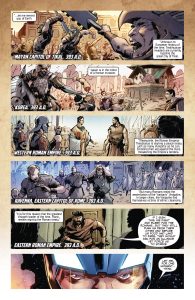 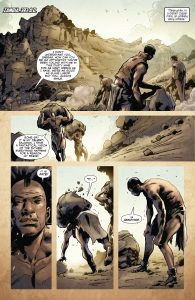 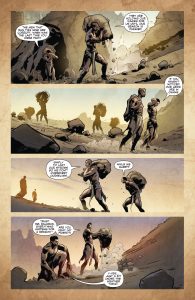 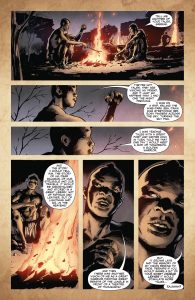 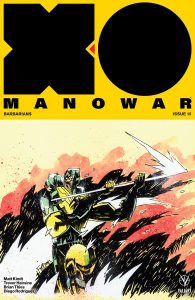 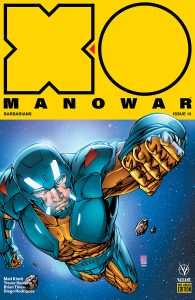 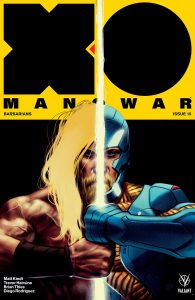 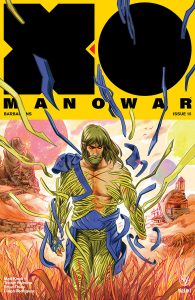