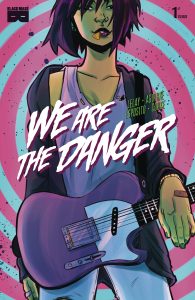 Starting as the new girl in your senior year of high school is never easy, and Julie Malliari is having a terrible first day- until she meets Tabitha. After a night out at a rock show, their friendship quickly grows and, before they know it, the two form a band with their sights set on a record deal… they just need to win it in a nationwide Battle of the Bands competition.
With Tabitha’s rival keen to take the prize for herself, it’s a battle not to be missed…
From artist and writer Fabian Lelay (Jade Street Protection Services), colorist Claudia Aguirre (Kim & Kim), and letterer Taylor Esposito comes this exuberant tale of friendship, growing up, and rock n roll
———-

Being the New Kid sucks. New kid in school… new kid in town… New Kid on the Block (sorry… that slipped). Julie takes being new in town up a notch, coming all the way from the Philippines for a fresh start. Then she meets Tabitha, that outgoing bundle of energy we’ve all known at one time in our lives, who’s always going, going, going. Tabitha invites Julie to a local concert, failing to mention that she’s more than just a music loving fan. Tabitha’s the drummer for the band, a local favorite led by Logan Ingram… until (important plot point ahead) there’s a falling out and Tabitha finds herself bandless, with Logan vowing (right there, you know she’s evil… only evil people “vow”) “You’ll never set foot on a stage again… I’ll make sure of it.”

Having established that Tabitha is a drummer in need of a band, and that Logan is obviously an arch-nemesis in the making, we’re drawn back to Julie. It just so happens that back in the Philippines, Julie used to play “for fun”, and she puts out the thought that she and Tabitha start their own band. Before long, Julie and Tabitha are joined by Scooter on bass, an as yet to be named Goth girl playing lead guitar, Dee the manager, and Simon, Tabitha’s brother (and Julie’s requisite crush). It all comes to a head when in a fit of jealous fury over finding out about Tabitha’s new group, Logan shoots out a tweet defying the “misfits” to even try to succeed. Gauntlet thrown, and the game is on.

It all sounds pretty intense, huh? A lot going on, moving at breakneck speed? Yeah, well it is. We Are the Danger is a slice of life title that sets its sights on the high octane world of “local bands”. If that sounds like some pretty small potatoes to rest a comicbook on, just remember that at one time bands like Metallica and Fleetwood Mac were “local bands”. All of that aside, at its heart this is a story about loners and castoffs coming together, forming more than a musical group and becoming greater than the sum of their parts.

Or not, I dunno… it’s only the first issue.

Nuts and bolts time. Creator/writer/artist Fabian Lelay (jeeze, when did you find time to take a breath?) isn’t going for shock and awe, but is dialing it down a bit to dip into some of the smaller moments in life. Maybe moments that don’t really seem “smaller” at the time, but add up to have a larger effect on things down the road. However you choose to look at it, We Are the Danger is a well-crafted title that takes many of its stylistic cues from manga comics, in both look and pacing. It gives the impression of being a heavily character driven storyline, which is a good thing because if Lelay had tried to focus on the music being played, I think there could have been some disappointment (point of order: comics are a visual medium). Instead, in the moments when the band is playing, the focus is more on Julie’s thoughts and feelings as she plays, what her music does for her. The reader is made privy to how her music is a more important part of her than she’d realized, a part that she sorely needed and missed, and is only now starting to get that as she’s brought back into that world.

Honestly, We Are the Danger would not have normally been a title that I would’ve picked up on my own, or chosen for a review out of the comics that are sent my way. What can I say besides, “Man cannot live by superheroes and spaceships alone.” I think that’s how that phrase goes, right? YOLO!

I’m happy to report that We Are the Danger is looking to be a well put together book, maybe not so big on the action and adventure, but tapping into material that’s a bit more relatable than battles against maniacal villains bent on world domination (cool as they may be). I can see it being a solid read for a younger demographic, someone that is living a little more closely to the world it represents, as well as fans of the popular “slice of life” manga stories.

If you think you fit into any of those categories, give this one a shot. If you don’t like it, you can always go back to the big explodey titles, of which there are blessedly many to choose from.