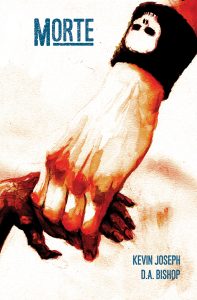 Morte is the story of the last man on Earth, now alone among a landscape of corpses, and how he chooses to spend his time in this new world. A powerful and gripping post-apocalyptic drama that will take a hot knife to your heartstrings.
———-

Alone among the dead, a young man makes his way through silent streets. One by one, he finds the pieces of a puzzle and labors to put them together. The work is hard and has no end in sight; the only way to move forward is one step, one puzzle, one piece at a time.

This is going to be a short review, because frankly Morte is a title that defies description. The long and short of it is that our un-named main character is by all indications the last living person after an undescribed cataclysm. Whatever the cause of this massive loss of life was both sudden and oddly peaceful, leaving corpses lying in the street, sitting at desks, or holding soft drinks, as though a switch was flipped and everyone just died.

We’re given no clue as to why our main character has taken on the enormous task of bringing the dead to their final resting place, and in the end it doesn’t matter one bit. Kevin Joseph’s story isn’t one that’s laid out for his readers. It’s presented “as is”, and leaves it up to the audience to fill in the blanks. Whether readers chose to create a backstory, to bring their own context to Morte is a matter of absolute choice. In fact, I have to wonder if Joseph’s intent wasn’t to lay out the body of a story, skipping over the beginning and ignoring an ending completely, to bring readers into the story telling process. The fact that he does it all wordlessly, his original script resulting in a mostly silent narrative, is the penultimate representation of a writing adage I’ve referred to a lot in past reviews: “Show, don’t tell.” It’s a simple concept that isn’t so easy to pull off. When it’s done well, it pulls the reader into the story, giving them the credit to be able to pick up the narrative on their own. It makes the whole thing more of a corroborative effort between writer, artist, and reader. Kevin Joseph has made a risky choice by going this route, and the result is an outstanding bit of writing that’s only understated on its surface.

For his part of that process, D. A. Bishop presents a visually desolate setting. The city’s empty streets, the shops, the schools, the diners… the silence of it all are skillfully rendered without so much as a sound effect inserted to break the stillness. The stoic expression Bishop gives the main character (I’d call him “Morty”, but it seems almost disrespectful) throughout most of the book, broken only once when faced with a classroom full of children, tells its own story for anyone willing and able to dig deep enough. Personally, I think the biggest feat Bishop pulls off in this book is the overall sense of repetition. We’re never given a sense of time or context, but there’s a strong sense (to me, at least) that the young man has been at his self-imposed task for some time. There are details… subtle indications of both routine and tenacity built into the work, and I’d have to credit much of that to the work of D. A. Bishop.

“Collaborative effort” is the best way I can think of to describe Morte, beyond the obvious effort put in by the creative team. It brings the reader into the storytelling circle to a degree far greater than is usually found in any medium. It’s by no stretch of the imagination an “easy read”, on a couple levels, but I’d definitely call it a “must read” for anyone who doesn’t want or need to have a narrative spoon fed to them.