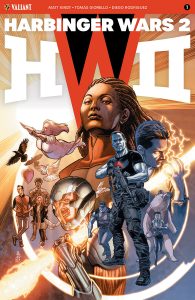 For the rare and immensely powerful subset of humanity known as psiots, their unique abilities have come with an enormous cost. Once, their existence was known only to a select few. Now, the revelation that thousands of these latent telekinetic “harbingers” secretly live among us…with the potential to be activated at any moment…has led the American government to a dramatic tipping point…

In the West, Livewire – the telekinetic technopath with the ability to bend machines and computers to her will – will be forced to choose between her former allies…or her newfound team of Secret Weapons. As the situation escalates beyond human control, the United States will be plunged into darkness from coast to coast, launching Bloodshot and Ninjak into a dangerous mission to neutralize their one-time teammate – and setting the stage for the most shocking, most violent, and most consequential clash of powers ever witnessed in the history of the Valiant Universe!
———-

OMEN, a private military contractor signed on to monitor & control the growing psiot population, went “Black Ops” on a group of castaways calling themselves “the Renegades”. In retaliation for the violent action against her young charges, the powerful psiot called Livewire turns out the lights on the United States, shutting down their power grid and the satellites they we all depend on. The U.S. government responds in turn, bringing some of the heaviest hitters of the Valiant Universe into play.

Aric of Dacia, the alien-armored juggernaut known as X-O Manowar is back from his inter-galactic sabbatical in which he overthrew and replaced an empire. While he’s not fully convinced of the cause, he’s seen the chaos of which Livewire is capable, and he’s very much aware of the effects another Harbinger War can have on his displaced people residing in Nebraska. Aric has a choice to make regarding how best to defend the few Visigoths left.

Colin King, MI-6 agent and master assassin known as Ninja K, also has a difficult choice. He and Livewire have a history that went far beyond their missions as members of Unity, but his government has ordered his involvement regardless. Will he be able to put his past behind him (recent events have cast a bit of doubt on that prospect), to follow orders without flinching?

The H.A.R.D. Corps, enhanced soldiers tasked with policing and controlling America’s growing psiot populace, are the military’s answer to the threat posed by Livewire and her Renegades. Led by Major Charlie Palmer, the Corps are able to access any previously catalogued psiot power, one at a time, through use of cybernetic implants. They will be on the front line of the coming fight, regardless of who winds up standing beside them… or across from them.

Livewire’s allies are a little more scattered. The nanite empowered super-soldier known as Bloodshot stands ready to take up the fight, and The Renegades themselves understand what’s at stake. A potential ally may be had in ultra-powerful psiot Peter Stancheck- a driving force behind the first Harbinger War- has his own agenda. He’s traveling North and South America, activating latent psiot powers in young people and urging them toward the relative sanctuary of The Renegades.

When all of these forces collide, the shockwaves are sure to be felt across the globe. It’s happened before, and barring the unlikely event of poor sales this time around it will happen again.

The first Harbinger War got past me. As Valiant’s answer to the cross-over event, it encompassed all of their titles and affected all of their major characters. Thankfully, Valiant has published the Harbinger Wars Compendium (highly recommended, by the way) to give their less up to speed readers, like me, a chance to catch up. With that little bit of homework behind me, I’ve been looking forward to diving into the second round.

In the opening issue, Matt Kindt has brought all of the players onto the field. Given the sheer scope of the undertaking, there wasn’t a lot of opportunity to go much farther than that. In this issue, we’re given a quick introduction to the many characters, and in that regard Kindt has done a great job. Unable to spend too much time focused in any one spot for too long, he’s still given readers- some maybe more familiar with the players than others- a peek at who these people are, and what motivations they may have. From Aric’s concern for his people and the ramifications for them should he jump in on the wrong side, to the H.A.R.D. Corps’ zeal to fight for God and Country, Kindt is able to very effectively summarize everyone’s role. It’s an impressive feat, and should be much appreciated for those not up to speed on all of the Valiant characters and their titles.

As the artistic team tasked with upholding the very high standards Valiant has set in the past, Tomas Giorello (art), Diego Rodriguez (colors), & Dave Sharpe (letters) have attacked a massive undertaking. While I’m sure that they won’t all be attached to every issue of every title affected by the Harbinger War, their participation here shines as an example of the artistry of the comicbook medium. Giorello’s illustrations have none of the too-polished work of digital art, actually reminding me somewhat of the work of John Buscema. Likewise, Rodriguez’s colors maintain that standard, lending color to Giorello’s high contrast work. As a letterer, Sharpe stands among the unsung heroes of comicbook art, letting the art flow uninterrupted by his text. I’ve heard it said that the very best letterers’ work should go almost unnoticed- a feat which Sharpe has ably accomplished. By that standard, I feel it’s important to point it out, and to remind everyone that letterers need love too.

Whether or not you’re a fully immersed fan of the Valiant Universe, this opening instalment should be a welcoming intro. All of the characters had time to shine and insights into each were given… a solid achievement in storytelling given that there wasn’t much time for a lot by way of action, and not something that I’ve always been able to say about many titles from those larger publications. That said, by the end of this issue it’s safe to say that my expectations have been set pretty high for the start of the next.

As Valiant’s answer to DC’s Crisis events or Marvel’s Infinity Wars (what are we up to now… three?), Harbinger War II is off to a solid start. 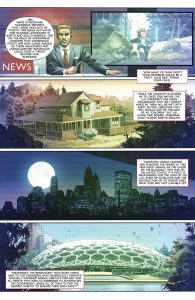 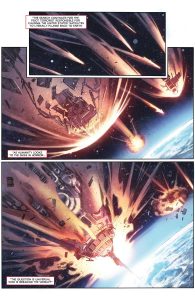 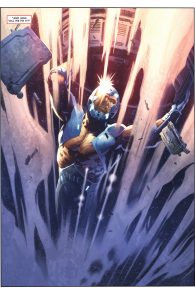 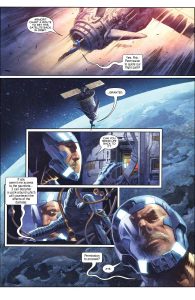 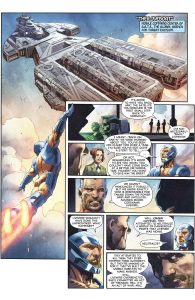 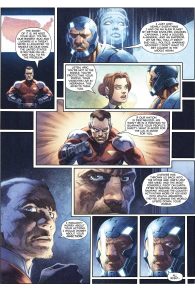 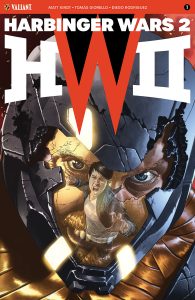 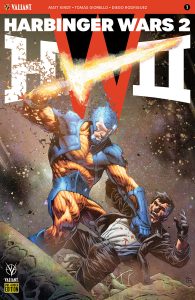 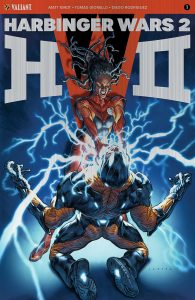 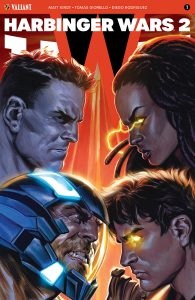 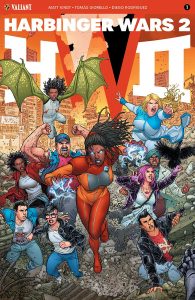