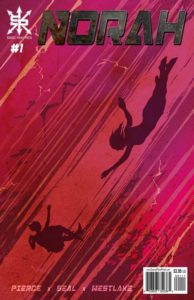 Norah Seizhelm is a “Coma Fisher” for hire. With the ability to tap into the mind’s eye, she’ll either find and retrieve you or help you cross to the other side. A mission of peace, to be sure. But how she obtained this skill is a story filled with government secrets, the death of thousands, and a threat of mass genocide. This new four-issue mini-series is written by Kasey Pierce (author of Pieces of Madness), and springs forth from her sci-fi epic The Prophecy Effect. With gorgeous digitally painted art from Sean Seal (Up the River, Wild Bullets) Norah is a ticking time-bomb packed with mystery, drama, science fiction, and horror.
———-

I had the great luck to be able to chat a bit with Kasey Pierce at C2E2 this weekend, and got a little insight into her story, Norah. Specifically, what was going on in her world when the idea was formed. Acquiring a deep and personal interest in all things neurological, Kasey dug into what we know and don’t know about the goings on in a person’s subconscious while in a deep coma. From the scientific to the metaphysical, she took in all the info she could get her mitts on, and out of that research came Norah.

I almost feel like I need to write two reviews here, because Norah’s story is told along two timelines, past and present. At first, we’re introduced to Norah in her role as a “coma fisher”, exploring the mind of a little girl named Anna, who’s experienced a seizure so intense that she’s been in a coma ever since. Now, months later and on Anna’s birthday, Norah is going to attempt to guide the little girl back to her terrified parents. Being able to rescue lost souls and reunite families seems like it would be a pretty great gig, but as Kasey starts to unravel Norah’s past, we find out that things weren’t all that benign in the beginning. The second issue starts to explore Norah’s past, when she and her husband were the star geneticists working for Nexx Industries. The story starts to go dark when it’s revealed that Nexx was actually a front for some of the CIA’s more… interesting projects (anyone out there ever heard of Project Ultra?). From there things go a little off the rails. Fast.

Sean Seal’s art takes an approach much different from what we’re used to seeing in comics. No heavy line work with larger than life figures here. Sean works in digital paints, and his style hovers around the realistic, the surreal, and the horrific, depending on the needs of the story at any given time… and yes, as Norah’s story rolls on, the term horrific is going to come into play. There isn’t much in the way of dynamic action taking place- Norah really isn’t that kind of comic- but the panels are laid out with an eye toward setting the tone. Often dark and confined, sometimes bright and hopeful, a reader shouldn’t have any trouble getting a handle on what mood is being set.

Norah isn’t like anything else being done that I’ve seen in comics, and it’s anything but predictable. Be ready for some plot twists, and hang on cuz they happen fast. Even if there was nothing else going for this title, Pierce & Seal have done a great job of keeping a reader back on their heels and needing to find out just what the hell is going on. 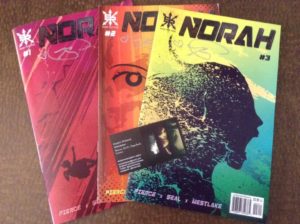 My copies, handed to me from Kasey Pierce herself 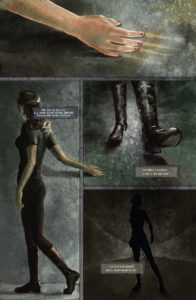 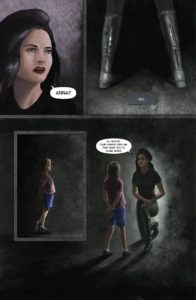 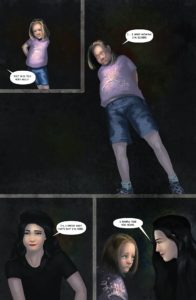 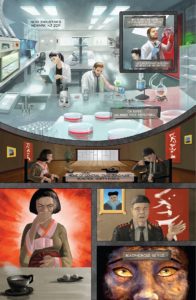 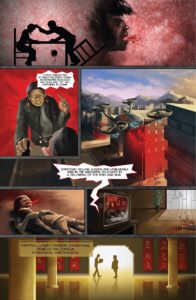 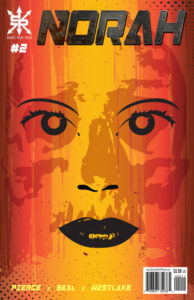 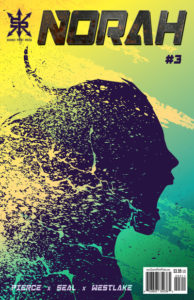