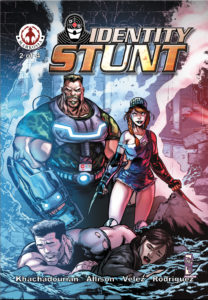 Professional stuntman Sami “Sam” Nasser is in the spotlight…in the worst of ways! Psychotic ganglord Dominus Smith has just mistakenly outed Sam as the alter ego of Studio City’s notorious and unhinged vigilante, Beatdown. There must be some misunderstanding! Studio City P.D. doesn’t think so and have brought our dude Sam in for questioning. With his location now public, bionically-enhanced assassins Pummel Deen and Jackknife Julie come gunning for the man they know as “Beatdown.” There must be some kind of mistake! And if Sam makes it though today, what other horrors may lay in wait? Capturing the bombastic tones of ‘80s and ’90s action films, writer Joe R. Khachadourian (Transformers: Mosaic), artist J. Briscoe Allison (Sweet Lullaby), and cover artist Tone Rodriguez (The Snake Plissken Chronicles) bring you a relentless odyssey involving complex characters, a touch of romance, and a fistful of masked lunatics!
———-

Sami Nasser: Stunt Man, military veteran, ex-husband, buddy, and loving father. All of these describe Sam in one way or another. A couple titles that do not describe Sam are super-hero, vigilante, or unforgiving sociopathic dispenser of cold Justice. However when notorious gang leader Dominus Smith “outs” him publicly as the equally notorious vigilante known as Beatdown, Sami’s already complicated life (see applicable descriptors noted previously) gets cranked into overdrive. Now the police would like to have a few words with Sam, and eventually a pissed off super-villain or two is liable to show up with a point of contention to be voiced.

I just reviewed the first issue of this new series last month (you can check it out here if you missed it), and even though I don’t generally do back-to-back reviews like this, I thought Identity Stunt was kind of a special case. In the first issue, Sam was pretty much going about his normal routine. He worked a bit, he hung out with his buddy Mason a bit, and he spent some quality time with his ex-wife… we’ll keep it PG and just say that it was some pretty high quality time. It wasn’t until the very end of the issue that Sami finds out about the monkey wrench that had been thrown into his life. I was left wondering just what kind of turn the series might take as things started moving along, and pondered just how out of control Sam’s life would become.

Joe Khachadourian did a great job of foreshadowing things to come, without really giving away too much. With a few sly references to classic action movies of the 80’s, which this title is an outright love letter to, he gave me just enough to question what kind of movie his story was taking place in. Was Identity Stunt going to be a chase thriller? A big budget blockbuster? Perhaps a direct to video guilty pleasure…? Hell, turns out that Khachadourian had no intention to settle for any one thing, and went with “all of the above”. As it happens, our innocent and reluctant protagonist isn’t just a veteran turned stuntman. He’s also a world class martial artist, and a rapid-fire quip tossing master, not at all the hapless bystander, that issue one might have led some to believe. Khachadourian’s dialogue remains smooth and natural (a huge plus for many readers… myself included), but now it has the distinct attitude of an entertainment genre I can’t get enough of.

The art, handled most excellently in issue one by Ruairi Coleman, has been turned over to the equally talented J. Briscoe Allison, with Juancho Velez & Timothy Brown on colors. As would have to be expected, the style is impressive and dynamic, very suitable for an issue that introduces two super-villains (see, they had to show up sooner or later) and gives readers their first taste of the action to come. Allison’s lines are crisp, giving the fight sequence a good flow, and the colors from Velez and Brown give the effects punch. My only wish is for the use of more open panels, maybe one or two more full page- or even half page- spreads. During the fight, which takes up a pretty substantial portion of the issue, the action was a little cramped with four to five panels per page and only one full page panel. Granted, the intent could have been to show how confined close-quarters fighting can be, and I could just be a big ol’ whiner who wants larger sweeping shots. In either case, this one nitpick in no way kept me from having a great time reading the book, and I’m more than happy to admit that it’s all just one guy’s opinion.

And just for the record, the deep cut movie references haven’t stopped either. Khachadourian has titled his second issue “Marked For Death”, and has included a quote from that classic Steven Segal masterpiece of mayhem and destruction. There are more, but the overall effect is that Identity Stunt has all of the appeal of the action for action’s sake movies I’ve been a huge fan of for years (I still have all of the Martial Law movies on VHS boxed up somewhere). There’s even a police Lieutenant whose eagerness and ability to jump into the fray had me convinced that, were she blonde instead of brunette, she could have been inspired by the great Cynthia Rothrock.

Bottom line here, I can’t say anything bad about Identity Stunt, and I’m eager enough to get the word out on this title to give it two full review articles in a row. I’ve done what I can, now it’s up to you to “get to the choppah!”

Oh man, even I’m having tough time believing I stooped to that one… sorry. 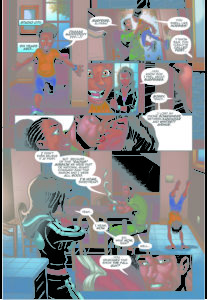 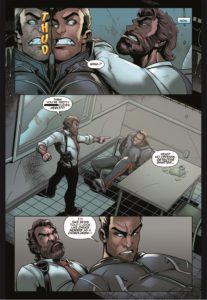 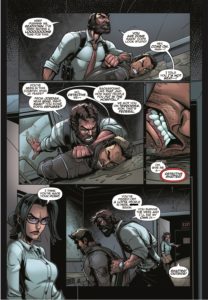 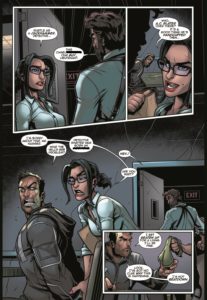