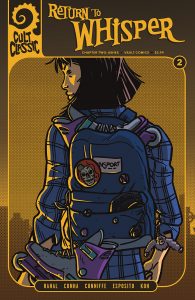 The Cult Classic series bring to life a dark, chilling, creator-owned shared universe set of stories. Return to Whisper draws you in to a terrifying tale… In 1997, a group of teenagers discover a treasure of immeasurable wealth. Fearing that their newfound fortune will be stolen from them, they make a pact: One day they’ll all come back as adults, divide their riches, and live happily ever after. Now…fifteen years later, they have returned. Not to uncover a fortune, but to bury a friend. From Eliot Rahal (Ninjak vs. The Valiant Universe, The Paybacks) & Felipe Cunha (Flash Gordon, Turok) comes the first full-length series in the much anticipated Cult Classic Universe!
———-

The Graveyard Gang, made up of childhood friends Wyatt, Dwayne, Sparrow, Malcolm, Cage/Nixon, Aubrey, Bobbi, Andrew & Ian, made a pact. Back in 1997, they were on the trail of a legendary lost treasure, and swore that if they found it they would keep it hidden until they were all adults and could claim it together. Present day, the leader of the group, Wyatt, has been killed in a car crash. Now the Graveyard Gang is back together in their hometown of Whisper for the first time since they were kids. The treasure still awaits their return… but they aren’t the only ones who know of its existence.

Everyone had that circle of friends from childhood, right? You grew up together, you hung out every day, all day during school breaks, and you swore you’d always be Best Friends Forever. Now ask yourself how often it actually works out like that? There may be the occasional reunion, everyone getting together again to talk about the “good times”, or you may still keep in touch with one or two, but for the most part that’s about it. People grow up, they become different people all going in different directions. The likelihood of that tight knit circle of friends sticking together is infinitesimal.

As it happens, the Graveyard Gang actually has stayed in touch- more or less- over the years. Granted, they had a very compelling reason to do so, namely the hidden fortune discovered when they were kids. Now things are different and the situation has changed. The now grown up Graveyard Gang is missing a member, their erstwhile leader Malcolm, and they’ve gathered together to pay their respects and to see him off in accordance with their “agreement”.

But Malcolm isn’t the only member of the Gang who’s no longer around, is he? If you read the first issue (and if you didn’t, stop reading this right now and go fix that… cuz there be spoilers dead ahead, mate!), you know that in the middle of an argument, Ian shoved Malcolm who then fell over and cracked his skull open like a cantaloupe that’s gone on past its shelf life. Two down, seven to go… the split on that hidden treasure is looking better and better, isn’t it?

Eliot Rahal has crafted a twisted story of childhood friends gone their separate ways, and the end result answers the question, what might The Goonies look like if it were updated by Quentin Tarantino? The group was rowdy and foul-mouthed enough as teens, and as we flip back and forth between timelines- from 1997 to the present day- we’re treated to a pretty slim contrast in personalities and group dynamic. The biggest difference so far is that when they were kids, no one killed anyone else… that we know of. On top of showing that childhood innocence isn’t always exactly “innocent” and that some things really never change, Rahal has also gifted this group of kids with lives lived outside of the framework of his story. We’re talking about twenty years difference, from then to now, and like most people these characters have all been about their lives for better or for worse. Seeing as I’ve already drawn the Tarantino comparison, I think we can agree that the interposing years have leaned a little heavily toward the “worse”.

The art comes to us courtesy of the team of Felipe Cunha (illustration) and Dee Cunniffe (colors). There aren’t any flashy splash pages, no larger than life characters or earth shaking explosions. The story is more about the smaller moments that people live through (or don’t) every day, sometimes noticed but very often overlooked. What’s beautiful about the job Cunha and Cunniffe have done is that they’ve etched, ground, and engraved every one of those moments into the faces of the grownup Graveyard Gang. The kids have all lived and seen things, done things, and in many cases it’s aged them beyond their years. Some of these people look worse than I do, and in 1997 I’d already graduated from high school, done a jaunt in the military, gotten married and had a couple kids… It’s really a credit to Cunha and Cunniffe that they haven’t left this misfit group unmarked by the passage of time, like a bunch of soap opera stars, while still keeping the features recognizable between past and present. In all, it’s a pretty damned impressive bit of work.

Cult Classic: Return to Whisper isn’t a joyous feel good reverie harkening back to the misadventures of youth, and it shouldn’t be entered into with that preconception. People who would start into this series with thoughts of The Goonies or The Sandlot in their heads are going to be surprised and possibly disappointed. Better to go into this most excellent title with open eyes and an idea of what to expect from the tone of the book.

On the other hand, you could jump into the lives of the Graveyard Gang blind, like I did, expecting the very thing I’ve warned you all against. Believe me, those expectations didn’t last long. Whisper has secrets, dark and weighty, and I’m pretty sure we haven’t even touched the surface of what’s been going on in that sleepy little town. As these secrets are revealed, be ready for some shocking “holy crap!” moments. I suppose, based on that, leaping before you look can bring its own reward. 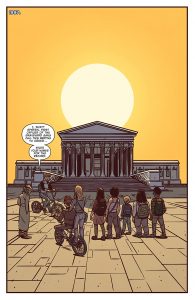 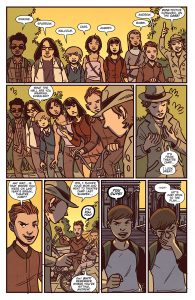 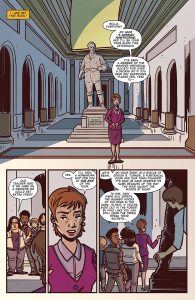