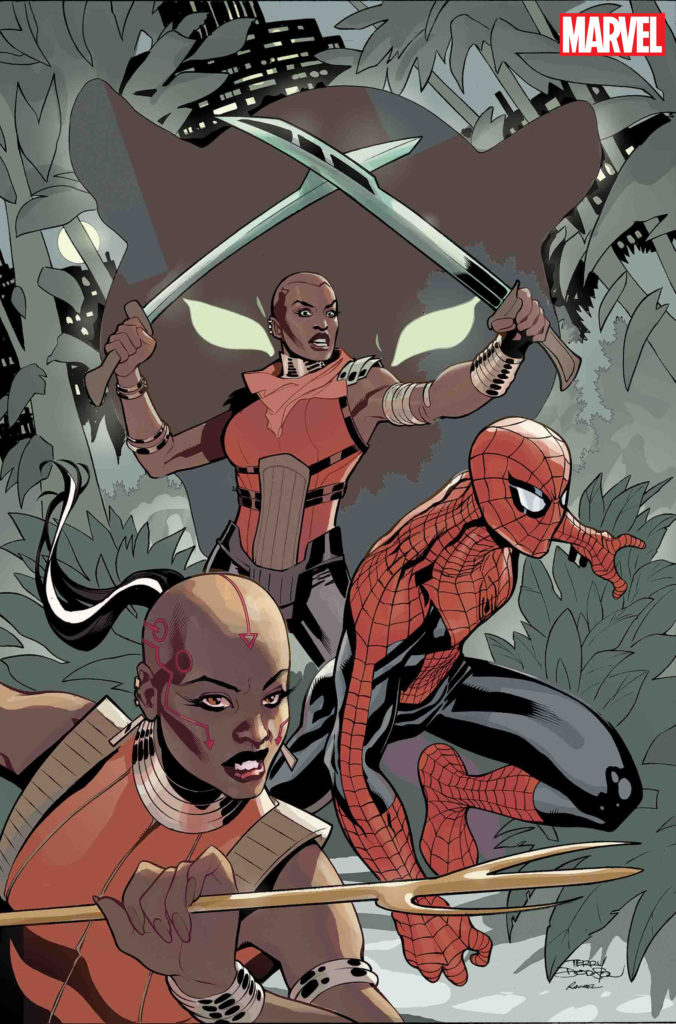 After their scene-stealing theatrical debut in Marvel Studios’ Black Panther, Wakanda’s fiercest warriors are traveling outside of their country to fight new threats and new troubles, in an all-new story by award-winning science-fiction and fantasy author Nnedi Okorafor.

A Hugo and Nebula Award winner whose best-selling books include the Binti trilogy, Who Fears Death and Akaka Witch, Nnedi first brought her storytelling to Marvel in the digital comic series Black Panther: Long Live The King and in the Vernomverse anthology story “Blessing In Disguise.” With art by Alberto Jimenez Alqurquerque (Jean Grey), WAKANDA FOREVER: AMAZING SPIDER-MAN #1 brings the Dora Milaje out of their vibranium city and into New York in the first of a three-part story when a Wakandan threat falls upon Manhattan – and they meet webslinger Peter Parker! The Dora Milaje’s adventures continue in WAKANDA FOREVER: X-MEN and WAKANDA FOREVER: AVENGERS in July and August.

“I’m super excited about writing this storyline. Powerful disciplined African women with futuristic spears who faced their shortcomings and changed a nation? Oh heck yeah, I’m so there,” shared Okorafor. “Fans of the Dora Milaje can look forward to seeing them out in the world beyond T’Challa and the Wakandan throne’s shadow. They’ll get to see the Dora Milaje come into their own, while teaming up with the unexpected.”

“As millions of moviegoers now know (and as comic readers already knew!), the Dora Milaje are the absolute coolest. And the rest of the Marvel Universe is about to learn this too when Okoye, Ayo and Aneka leave Wakanda on an adventure that will see them team up with Spider-Man, the X-Men and the Avengers,” teased series editor Wil Moss. “Nnedi Okorafor and a talented team of artists will be telling one Dora Milaje story that runs through these three separate WAKANDA FOREVER one-shots. We’re lucky to have Nnedi on board for this — she’s an incredible novelist, and her recent BLACK PANTHER: LONG LIVE THE KING digital series proved that she’s a great comic book writer too. She’s come up with a crazy-tough problem for the Dora Milaje to solve — but if anyone can, it’s these crazy-tough women.”

Join the fearless trio of Okoye, Ayo and Aneka in all-new stories as they travel the globe to protect the country – for Wakanda!