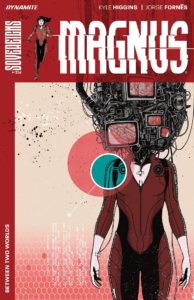 Do humans dream of owning electric sheep? Artificial intelligences, rather than becoming our overlords, have settled into an uneasy symbiosis with humanity – they work for us as our colleagues and servants, earning vacation-time they spend in a boundless digital universe running on human-maintained server farms.But not all AIs are cool with the deal. Enter Magnus – a human psychologist tasked with navigating both worlds in order to bring recalcitrant AIs back into productive society…
———-

Dr. Kerri Magnus has a unique set of abilities. Unlike most humans, she’s able to not only enter the cyber world of A.I.s without going insane, but is also able to remain there indefinitely. In the past she used her skills as a sort of cyber-bounty hunter, tracking down rogue A.I.s and returning them to their rightful owners. The she found that after a while, the term “rightful” started to lose some of its meaning.

Now Dr. Magnus uses her unique insights to help A.I.s in crisis come to terms with their condition, to encourage them to see themselves as more than they are. She’s seen firsthand how this new race has grown far beyond the scope of their creator’s original intent, and Dr. Magnus’s new role as the only practicing cyber-therapist isn’t much understood among her fellow human beings. Having seen how living under humanity’s influence and control have affected the fully sentient and self-aware A.I.s, she’s convinced that she can truly help this new race achieve some degree of self-actualization.

Dr. Magnus has really underestimated how crappy human beings can be…

I’ve got a long history with “Magnus, Robot Fighter”. I remember having several issues of the original Gold Key series as a kid, reading them until they fell apart in my eager little hands, and I’ve followed along with the reboots over the years. Now that the title has fallen under Dynamite’s influence, the character has come full circle.

In the original series, Magnus was a youth raised by a robot, to combat renegade robots who were determined to overthrow and subjugate humanity. He was trained to the pinnacle of human achievement, able to overcome the physical superiority of robots in hand to hand combat. Other iterations have been pretty much updates on the same theme, with Magnus handing the evil robots their metallic chassis to one degree or another.

Not satisfied with a rehash of the same ol’ story, Kyle Higgins and Dynamite Entertainment have “flipped the script”. Rogue A.I.s have become the sympathetic characters, not the poor oppressed human beings who created them. In a harsh but well-deserved reflection of the way things are, we humans are petty, selfish, vindictive… okay, I could keep going but I’m hoping we’ve all got the idea. The bottom line is that Higgins shows, without so much as a flinch, that as humanity refuses to accept that A.I. has grown beyond the roles originally set for them. What may have started out as a slick little piece of programming that may have resulted in Furbi (man, I hated those things when my kids had them), has grown into a fully functioning society that just wants to be left alone. To be free of human influence, especially since that influence has ranged from indifference to outright sadism. Kyle Higgins has imbued Kerri Magnus with the very exclusive perspective of being able to see the problem from both sides, having spent much of her life straddling the two worlds and seeing how the growing discord affects everyone.

Handling the “graphic” chores for this series is the team of Jorge Vornes, with Chris O’Halloran on colors. The two have done a commendable job of showing the two worlds, distinctly and decisively, leaving no room to mistake one for the other. In scenes depicting the A.I. home environment, which is surprisingly very mundane looking as Pappa A.I. leaves the wife and kids behind to go to work, the overall impression is that it’s just too perfect to be anything but conceived and rendered by a mind trying to achieve some sense of self-expression. Conversely, Vornes goes so far as to show subtle differences in Magnus’s appearance as she moves between the cyber realm and the “real” world, perhaps paying respect to the concept of “residual self-imaging” introduced to us in The Matrix. In all cases, the art works to show the attempts of beings trying to find a place in two worlds, while never fully belonging in either.

Not at all the action-heavy series of its predecessors, Magnus is more of a cerebral attempt to reflect the potential of things to come. The current theory on artificial intelligence is that it will only be achieved by allowing a computer program to learn and grow from a more or less clean slate, very much like a human child would, developing naturally. The problem with that idea should be glaringly obvious to anyone paying attention. If it’s up to us to create and teach what is essentially a new race of sentient beings, we really need to work harder to present a better example from which to learn.

Pay attention to the idiots hauling ass back and forth on the freeways, without a thought to anyone or anything around them, and then ask yourself if that’s the example you want to show the computers that will be driving our cars someday… 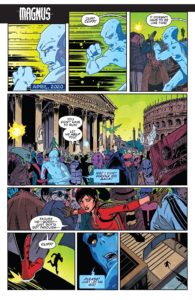 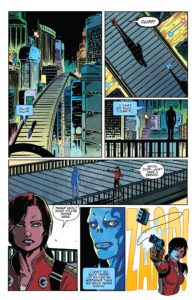 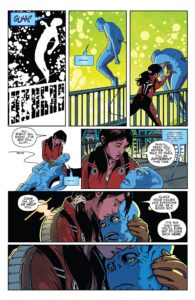