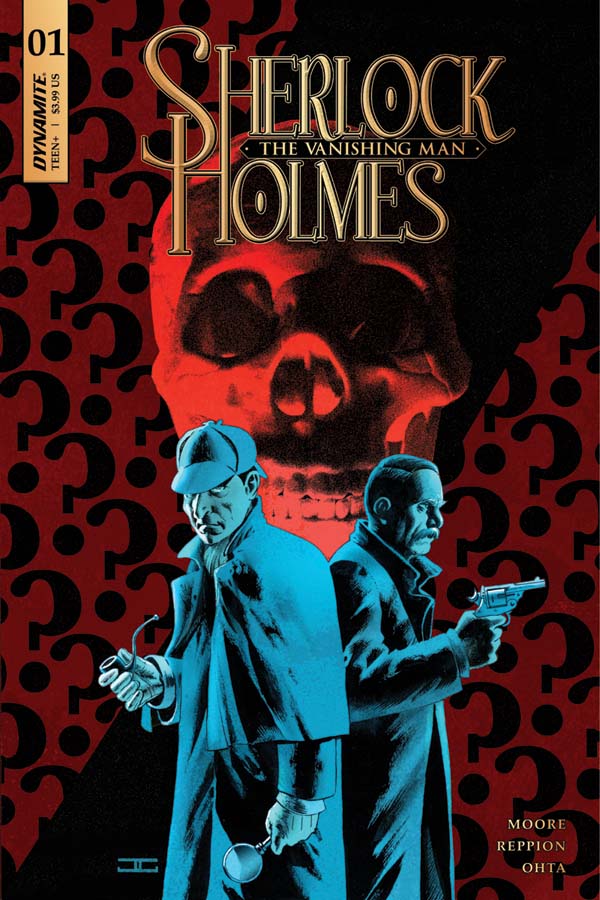 “Sherlock Holmes is just such a great character and the world he inhabits is such a rich one. Even in the original stories, Arthur Conan Doyle was always hinting at all these other, as-yet-unrecorded adventures which he and Dr. Watson had already had. To be able to fill in some of those gaps with our own stories is a huge privilege, but also loads of fun,” say Moore and Reppion in a joint statement.

Sherlock Holmes: The Vanishing Man #1 introduces the curious case of Michael Williams, a reliable man at both work and home, who disappears without a trace from foggy old London Town. The famous consulting detective and his faithful companion Dr. Watson investigate, only to discover new dangers lurking around every corner!

“The Vanishing Man is a mystery a bit more in line with the Strand Magazine short stories which were collected in The Adventures of Sherlock Holmes,” say Moore and Reppion. “As ever, part of the fun is tying the whole thing into the existing Holmes chronology; working out which of the original stories comes before and after, and exactly what’s going in Holmes’ life and world at that time. We’ve always tried to stick to Arthur Conan Doyle’s version of Holmes as closely as possible.”

Leah Moore and John Reppion are a husband-and-wife writing team based in Liverpool, UK. Scripting comics together since 2003, the duo have written for the likes of 2000 AD, Dark Horse, DC Comics, Dynamite, and IDW. They have written established characters such as Doctor Who and Sherlock Holmes (The Trial of Sherlock Holmes, The Liverpool Demon), as well as creating their own. Together, they have faithfully adapted notable works by Lewis Carroll, H. P. Lovecraft, Bram Stoker, and M. R. James into comics and graphic novels. In addition, Moore and Reppion were consulting writers for Frogwares Games’ multi-platform adventure, Sherlock Holmes: Crimes & Punishments.

“Everyone loves a good mystery, and Leah and John are two of the best at crafting them. They launched our Sherlock Holmes brand in 2009 to critical acclaim (just as they did with our adaptations of Alice in Wonderland and Dracula), and we are eager to pour over their scripts for clues to the latest caper,” says Nick Barrucci, CEO and Publisher at Dynamite. “Add newcomer Julius Ohta as an accomplice and that beloved scalawag John Cassaday into the mix, and you have all the ingredients for a wild romp through Victorian England!”