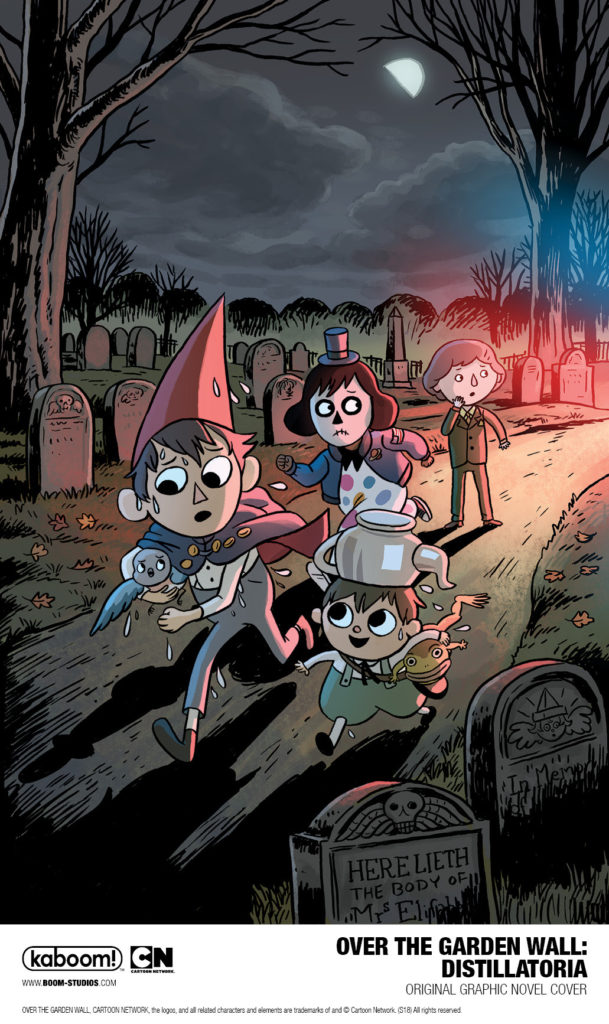 BOOM! Studios, in partnership with Cartoon Network, is proud to announce OVER THE GARDEN WALL: DISTILLATORIA OGN, an all new original graphic novel set in the Emmy Award®-winning Cartoon Network mini-series arriving in stores November 2018. While exploring the Unknown, Greg and Wirt suddenly find themselves back home—only it looks like they brought Beatrice back with them?! Now, it’s up to them to help Beatrice return safely to the Unknown before anyone realizes she can talk. But it looks like something sinister might be happening in the shadows and everything might not be as it seems. It’s a mad dash filled with friendship, love, Sara, and learning that home might be a lot further away than you think.

“As a borderline-scary fan of Over the Garden Wall, I’m excited to find myself at the helm of a new adventure for Wirt, Greg, and Beatrice. Really, really excited, you guys,” said Jonathan Case. “With Distillatoria, we’ll revisit some familiar and beloved bits: the Unknown, the Wirt-poems, the rock facts…but we’ll also explore new and (I hope) surprising territory. I dearly hope this new book is a good time for all my fellow old souls and romantic weirdos. And of course, all the lovers of Greg.”

“At this point drawing Over the Garden Wall feels like home to me,” said Jim Campbell. “I love this world. I’m really excited about exploring a lot of the new, weird, and creepy imagery Jonathan has conjured up for this story. But it’s also got some of my favorite settings and characters from the show we haven’t seen in the comics yet. This is going to be a good one.”

OVER THE GARDEN WALL: DISTILLATORIA OGN is the latest release from BOOM! Studios’ critically acclaimed KaBOOM! imprint, publisher of world-class licensed series such as Adventure Time, Steven Universe, Peanuts, and Garfield, along with original series like Brave Chef Brianna by Sam Sykes and Selina Espiritu, and The Deep by Tom Taylor and James Brouwer.

“OVER THE GARDEN WALL: DISTILLATORIA is a fun filled adventure with Wirt and Greg having to deal with some strange twists and turns as they find themselves suddenly home after being trapped in the Unknown,” said Whitney Leopard, Editor, BOOM! Studios. “Jonathan and Jim have made an insanely talented team and this is definitely going to be a story that you don’t want to miss.”

Print copies of OVER THE GARDEN WALL: DISTILLATORIA OGN will be available for sale in Fall 2018 at local comic book shops (use comicshoplocator.comto find the nearest one), book stores or at the BOOM! Studios webstore. Digital copies can be purchased from content providers, including comiXology, iBooks, Google Play, and the BOOM! Studios app.

For more on OVER THE GARDEN WALL: DISTILLATORIA OGN and other projects from BOOM! Studios, please visit www.boom-studios.com and follow @boomstudioson Twitter.