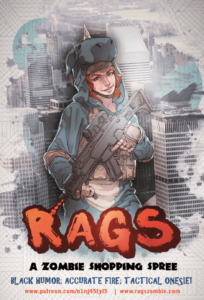 RAGS is a comic involving two military veterans and their quest for a sense of normalcy during a zombie plague that has wrecked the liberal state of California. But this isn’t a tale about Zombies. This is a tale about pants. A tale about PTSD. A tale about finding a purpose. About setting aside your own prejudice. About overcoming guilt and insanity. Things that most other authors are too afraid to tackle. Hold onto to your poopers and get your tactical onesies ready.
———-

Meet Regina “Rags” Ragowski (features modeled after Liz “TheGingerarchy” Finnegan), veteran of the Marine Corps (Semper Fi, devil dogs) and zombie apocalypse survivor. You’d think that in itself would be something to celebrate, but you might not have thought it all through. The end of the world as we know it didn’t catch Rags fully kitted out and ready to lock and load. That would be way too easy. Nope, apparently when the dead began to rise and sate their hunger for human flesh, she was on a bit of a holiday. Being that her story begins in Paso Robles, California, it would be safe to figure that maybe she’d spent some time at the beach. This possible scenario is further played out by the simple fact that as we meet Rags, she’s on the run wearing nothing but a bikini and a pair of sneakers. Whatever the reason, it definitely ups the tension a bit for poor Regina.

Now some might take the more cynical path and assume that Rags’s current state of undress could be an effort on the part of the creative team to pander to more juvenile tastes. Creators Brian Ball and Trent Luther definitely wouldn’t be alone in that respect, with titles like Lady Death, Red Sonja, and Witchblade setting the bar. I dunno, I didn’t write the story so I’m not one to judge (honestly, I’m just happy Rags wasn’t wearing high heels when the shit hit the fan). What I can say by way of defense is that when you stop and think about it, it kinda makes sense. When the end of the world comes and World War Z becomes more documentary than a work of fiction, it doesn’t seem like a stretch of the imagination to assume that not everyone is going to be wearing biker leathers and steel toed boots. All adolescent winks and nudges aside, this leaves poor Rags in a pretty vulnerable state. If you were being chased by a horde of the undead while wearing nothing but a bathing suit, how would you feel as all those gnashing teeth and grasping hands tried to latch onto you? But Rags may be tired, she may be hurt, and she may be outnumbered, but as long as she’s got legs that’ll carry her, she’s also a Marine.

But yeah… pants would be nice.

The tagline for Rags is “Black humor; Accurate fire; Tactical onesie!” While the first outing doesn’t have much time to build up to any of that, there is a hint of the humor. To put it in plain speak, Rags has a bit of a mouth on her, particularly when under duress. The accurate fire and “tactical onesie” have yet to be seen- although it was nice to see Rags practicing good trigger discipline (trigger finger outside of the trigger guard when not shooting). That isn’t something you normally see in comics… or in movies, on television, and sadly on occasion at the shooting range.

So yeah, there isn’t as much to go on here as I would’ve liked, but Rags is showing some promise. The character has enough going for her (stop snickering) to make her interesting. That’s a trick as a writer, to introduce a character and a setting within a relatively few pages. The setting is pretty easy these days, with zombies staggering around everywhere you look, between comics, television shows, and movies. Character is a little trickier, and Brian Ball handles it well here, letting Rags demonstrate who she is more through actions rather than words.

When it comes to the action, it’s all up to the artist to make it work. In that regard, Luigito Tuerel does a great job. Rags is pretty much always in motion, from start to finish with the exception of a bit of time spent on her back (seriously, quick laughing) in the last couple pages. As far as the character designs go, I’ll let the work on the following preview pages speak for itself. As for the artistic choice of color usage, I thought it was kinda cool that most of the book was done in black & white, leaving color to shades of red, and the blue of Rags’ tattoo (I don’t know what her MOS was, but it’s a bet that she didn’t serve on any kind of Embassy Duty with those sleeves). I’m kinda hoping this is going to be the ongoing style in the series as it keeps rolling along.

It’s worth noting that Rags is available in two editions, depending on your personal taste. For the artistic purists out there, who may want to be able to appreciate Rags (the comic, not the character) in its unaltered glory, there’s the uncut version. There’s also an edited version for the more… I dunno, help me out here… puritanical, maybe? Anyway, you can read the book either with the black boxes covering Rags’ (the character, not the comic) private bits, or without. That’s freedom of choice, one of the notions our great nation was founded upon, and it’d be a shame not to exercise it.

And there it is… to celebrate what it truly is to be an American is to enjoy the freedom to choose. It’d be a shame if more people didn’t chose to give Rags a read. With the promise of what’s to come (tactical onesie?) I can’t think of a more compelling reason to take a look at this comic, inspired by (according to its creators) a night spent drinking too much while playing Left 4 Dead 2… 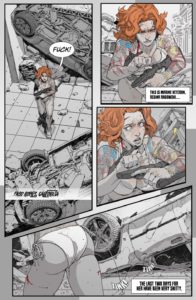 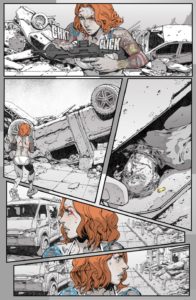 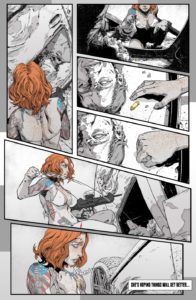