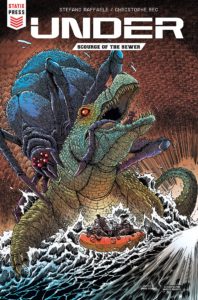 Classic B-movie horror! Some people bury their secrets underground. In megalopolis, the filth flows into the sewers. Lt. Wilson Jericho, disgraced above ground and busted down to an officer in the Sewer Police, thinks he knows everything there is to know about what lies beneath. But scientist Sandra Yeatman is determined to discover the truth behind the urban legends – and prove that something monstrous will soon crawl out and rip the city apart! “Great and wise entertainment! If the French nouvelle vague made a Troma movie, this would be it… except it is much more engrossing!” – Lloyd Kaufman, Troma Director. Art by Stefano Raffaelo (Marvel Generations: Hawkeye and Hawkeye).
———-

In a world far removed from the eyes of man, beneath the sprawling city of Megalopolis, lurks a predator so deadly, so lethal, that it could only be contained in… The Dead Zone. The oldest and most dangerous section of the city’s 700,000,000 feet of interconnected sewer tunnels, the Zone remains outside of the areas normally patrolled by the brave men of the city’s Water Authority Police Force- the elite “Sewer Police”. Now, Lt. Wilson Jericho must overcome the demons of his past in order to lead his team against the very real, very large demons prowling the vast network of tunnels beneath Megalopolis.

(I really hope you read that in “80’s action movie announcer guy” voice, because that’s how I wrote it.)

I’m just gonna come out and say it… There’s nothing about this comicbook that isn’t over the top and pushing well into the boundaries of the ridiculous. I’m also gonna come out and say that there isn’t anything about this book that I didn’t love. It has everything the cheesiest and most awesome direct to video 80’s action flick could hope to contain in its cardboard VHS slipcase, and it revels in its very outrageousness without the slightest hint of an apology. It’s a beautiful mess of movie tropes that embraces its own sense of the absurd, giving the reader a nod and a wink at each zinger delivered.

Sandra Yeatman, enterprising zoology student out of Megalopolis University, is writing her thesis on Cryptozoology- the study of animal species yet to be discovered or proven to exist. As part of her research, she intends to follow up on the countless urban myths about strange creatures of unusual size inhabiting the city’s sewer tunnels. Due to the danger of such an endeavor, Sandra will be accompanied by Lt. Wilson Jericho, a cop on the edge after losing his partner in a high stakes shootout, now serving as a member of the Megalopolis Water Authority Police Force… the Sewer Police. Their journey into darkness will place them squarely in harm’s way, and they’ll get more than they bargained for once the sewer’s denizens catch the scent of fresh human blood.

Writer Christophe Bec has done some research. Not only does he show us a few examples of actual creatures that might register to some as bizarre- his breakdown of the camel spider “discovered” by American troops in the Middle East is spot on- but he’s also done some digging into urban myth. We’ve all heard stories about alligators and crocodiles in the sewers, flushed down the toilet of some urbanite who thought the little fella would make a cool pet until he realized how big it was going to get. There’ve been tall tales and movies aplenty tapping into that universal gem. What Bec has done here, though, is he’s taken that oft-repeated story and blown it all the hell out of proportion, embracing the ridiculous and turning it into something, if not exactly new, still completely entertaining. Groan inducing at times, sure, but also laugh-out-loud absurd, and occasionally downright creepy.

For the record, I’m really hoping the laugh-out-loud parts were deliberate…

Bringing this gore-filled cheesefest to life, the team of Stefano Raffaele and Christian Favrelle has done a great job of creating an underground world of danger and mystery. As Jericho and his elite team of Sewer Police trek farther and deeper into the tunnels beneath their city, Raffaele has managed to give readers a look at environments variably sprawling and vast, then cramped and mysterious. In scenes where a predatory monstrosity lurks beneath the surface of the water, Raffaele has managed to capture some of the tension of being in the water with something… big… beneath you and out of sight. Christian Favrelle had the unenviable job of coloring… well, he had to color sewage. Thankfully, he was given some more variety in his environments, with several scenes played out on the surface, and especially in showing the difference between the new high tech sewer systems and the old network of tunnels known as the Dead Zone. Regardless of where he was at the time, Favrelle did a good job of highlighting whatever action was taking place on the page, his colors able to set the mood and tone of a given scene.

With violence, language, and some nudity, Under: Scourge of the Sewer is aimed at more mature audiences. Okay, “mature” may be a little misleading. How ‘bout we go with “seasoned”? This title is entertaining as hell, and clocking in at over fifty pages for the first issue it definitely doesn’t appear to be just interested in a sprint to the finish. What’s more, there looks like there might be a little more going on in the smelly waterways than just giant Cryptids, so check this one out and stay tuned for more big things to come. 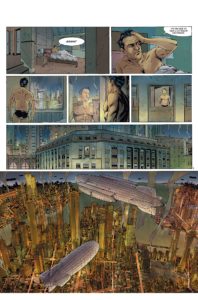 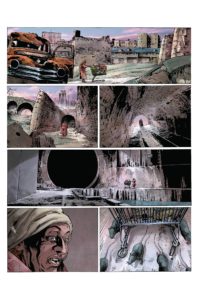