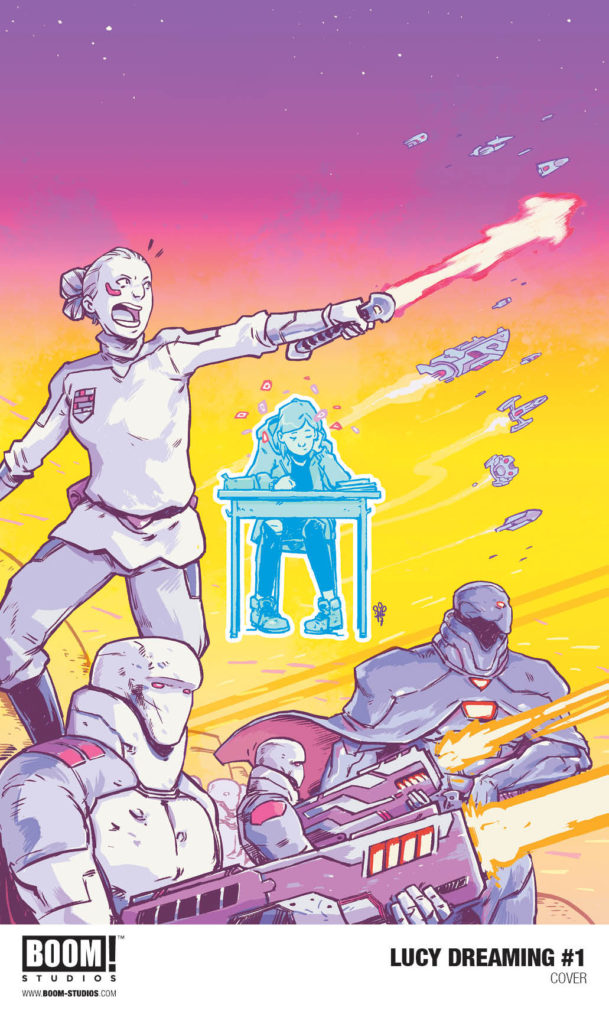 BOOM! Studios is pleased to announce LUCY DREAMING, a new limited series debuting March 2018 from Say Anything frontman Max Bemis (Moon Knight, Polarity) and GLAAD Award-winning artist Michael Dialynas (The Woods, Teenage Mutant Ninja Turtles) about a young girl who goes to sleep every night and becomes the hero of all of her favorite stories, living out grand adventures and learning more about the reality she lives in than she could ever learn in her waking life.

“I wanted to create a comic book I could give to my daughter when she’s old enough to read,” said Bemis. “Plus, as a kid, I remember enjoying Star Wars, The Goonies, and Indiana Jones—things that were larger-than-life adventures. I wanted to do something like that.”

Lucy is a grumpy, emotive, full-of-life, 13-year-old girl who keeps waking up in the shoes of various archetypal female heroes. One night she’ll wake up as a space princess turned rebel leader, another night she’ll be a reluctant heroine who becomes the symbolic motivation for an entire country to revolt. But as fantastic as these “dreams” are, they carry the same life-and-death stakes as if Lucy was awake in real life. The reason why all this is happening to her, though, is a secret for now.

“I don’t want to spoil why it happens,” Bemis said. “But I will say it’s a confusing time for Lucy. She’s on the cusp of young adulthood and doesn’t feel like she fits in. She looks down on the hypocrisy she sees surrounding her so she’s escaped into the world of fiction.”

“After drawing a four-year long YA series on a murderous planet in a galaxy far far away, LUCY DREAMING seemed like a perfect opportunity to stretch my muscles on a fun story involving multiple universes and different genres,” said Dialynas. “The fact that I’ll get to play around with a new style AND build up a few new worlds is very exciting for me!”

LUCY DREAMING #1 will have a cover illustrated by interior artist Michael Dialynas. Print copies will be available for sale March 2018 at local comic book shops (use comicshoplocator.com to find the nearest one) or at the BOOM! Studios webstore. Digital copies can be purchased from content providers like comiXology, iBooks, Google Play, and the BOOM! Studios app.

“Over the past few years, Max has proven himself to be one of the most exciting new voices in comics, with the writing chops to back it up,” said Eric Harburn, Editor, BOOM! Studios. “Brought to life by Mike’s immense, emotive talents, LUCY DREAMING is fun, dark, aspirational, and thought-provoking.”

For continuing news on LUCY DREAMING and more from BOOM! Studios, stay tuned to www.boom-studios.com and follow @boomstudios on Twitter.