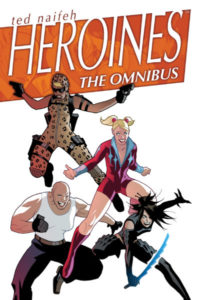 Ted Naifeh Goes Direct to Fans for Crowdfunding
Acclaimed artist of Gloomcookie and creator of Courtney Crumrin, Ted Naifeh, has launched his first Kickstarter campaign. The Heroines: The Graphic Novel campaign is produced in partnership with Space Goat Productions and will be published under their digest-book imprint Backpack Editions. The campaign seeks to fund the manufacturing of the Heroines Graphic novel containing all eight issues of Heroines. The Heroines Graphic Novel will be published alongside other Backpack Editions like Big Game Hunters, Mage, Inc, and Dark Lily.
“All my life, I’ve been a fan of superheroes in one form or another,” said creator Ted Naifeh. “And I’ve always wanted to explore the genre, to see if I could tease out something new. Working outside the mainstream and with readers directly on Kickstarter gives me the creative freedom to do just that.”
Heroines is about a would-be superhero, Marcy Madison who tries to assemble a team of like-minded heroines by placing an ad on Craigslist. But the response she gets is far weirder and more dangerous than she bargained for. Can a collection of misfits become a superhero team in the midst of both modern day sexism, crime, and injustice?
“Ted has spent twenty years cultivating a relationship with his readership,” said Publisher Shon Bury. “Moving his work to Kickstarter is the most natural next step he can make for Heroines or any future project currently fomenting in his very creative mind.”
There are 12 different tiers in the Heroines Kickstarter that backers can pledge at as well as a retailer exclusive tier offering 50 percent off the purchase of five books. Some of the other tiers will include signed volume ones of heroines and likeness cameos within the graphic novel. Naifeh will live stream from the Kickstarter campaign page every Tuesday in a segment called “Ted Tuesdays”, in which he will display new sketches for the graphic novel, answer questions and take backer-exclusive commissions. Find out more about the campaign on Naifeh’s page http://tednaifeh.com/.
# # #
MORE ABOUT SPACE GOAT PRODUCTIONS:
Created in 2006, Space Goat Productions has 150 years of combined experience producing comic books, tabletop games, video games, commercial art, and concept design. They have worked on global brands and produced commercial art with Blizzard Entertainment, Riot Games, Marvel Comics, DC Entertainment, Disney Interactive, Nike, Universal City, Penguin, Capstone, Scholastic, and more. Space Goat is the publisher of the Evil Dead 2 and The Howling comic books along with their line of Backpack Editions, graphic novels designed to fit in the backpacks of a diverse readership. Their new tabletop game division, Space Goat Play, launched with the Evil Dead 2, Terminator, and The Howling board games to critical acclaim. For more information please visit www.spacegoatpublishing.com, www.merchgoat.com, and on Facebook at www.facebook.com/spacegoatpublishing
MORE ABOUT BACKPACK EDITIONS:
Backpack Editions is a collection of 6 unique digest size books, including Heroines, Dark Lily, Mage Inc. and Big Game Hunters. Love the feeling of paper in your hands but still want to carry around your favorite stories? Space Goat’s Backpack Editions come in a sturdy 6×9 size, perfect for the reader on the go. Like their Facebook page at www.facebook.com/BackpackEdition
MORE ABOUT TED NAIFEH:
Bursting onto the scene as co-creator/illustrator of goth romance comic Gloomcookie, Ted Naifeh is best known for Courtney Crumrin, the multi-volume horror-fantasy adventures of a tween curmudgeon witch and her warlock uncle. In 2014, Ted wrote and illustrated Princess Ugg, the adventure of a barbarian princess going to princes’s finishing school. Courtney Crumrin has been nominated for several Eisners, and remains a popular mainstay on the shelves of discerning comics shops. Princess Ugg has garnered much praise from the comics community and beyond.
← Previous Post
Next Post →