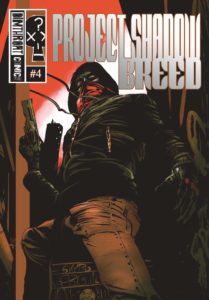 Marrok (In Arthurian Legend, Marrok was A knight thought to be a werewolf… also a title for the Alpha of the North American werewolves in the Mercy Thompson book series) has been running the streets of Seattle since the end of Shadow Breed’s first story arc (check out issues 1-3), and has taken on the responsibility of keeping the peace. When that peace is broken in pretty dramatic fashion, by a clash between two high-tech armored combatants, Marrok steps in before the property damage gets too out of hand. What he doesn’t realize is that getting in the middle of this particular fight is going to put him on the radar of the evil Sintech Corporation (you know they’re evil because the word Sin is right there in the name). Marrok was a Special Forces operator assigned to a top secret and highly experimental program, through which he found himself transformed into a werewolf. Now he’s escaped and living on the run from the evil corporation that was behind his transformation (Sintech), and has taken up residence in Seattle. When Dr. Steven Monroe (who looked a little like Rick- of Rick and Morty- to me), lead brain for Sintech’s Bio-Molecular Science Division attempts to cash in on his knowledge and leave his employers behind, it sparks an airborne battle as Sintech’s forces attempt to retrieve stolen data.

Right off the bat, I’m gonna say that this series kinda came out of left field. I happened to catch a post on that Twitter thing from @ProjectShadowBr, and was curious enough to look into the title. After checking out their social media page, I was curious enough to purchase the first two books in the series. Project Shadow Breed is an action series, through and through, with an interesting enough premise to pull me in, and is pulled off with enough talent to keep me there.

Over the course of the first three issues, co-creator/writer Josh Schneider & writer/co-creator Justin Bartz established up a cast of characters who were interesting and showed some promise of depth. Sure, they may be a little familiar, but there’s more than enough meat on the bones to make up for that… also, I read a lot so eventually I’m going to start recognizing every character I see. In particular, the relationship between Marrok and his friend/rescuer/mentor Walsh is rough around the edges and full of quips and jibes. The entity of Sintech lurks in the background, its tendrils reaching out into more directions than were immediately shown. Run by a sinister board of directors made up of some pretty interesting looking characters I’m looking forward to getting to know, and holding some highly placed puppets in our government, Sintech is a little more remarkable than the average evil corporation.

The look of Project Shadow Breed is pretty impressive as well. The work done by Stefani Magicianshouse is impressive in that she stays away from the larger than life characters usually seen in comicbooks. Her figures are drawn with an eye toward realism, with people wearing normal street clothes mixed in with the odd remote operated combat mech. Another thing I like about Stefani’s design is that Marrok’s character design is more human-looking, akin to Lon Chaney’s version of the Wolf-Man, and a little less Underworld. In the story, that’s due to a mishap that more completely bonded his human DNA to the werewolf genes. Now what I really liked was the way she handled the action sequences… A fight scene that looks like the artist used real life figures for reference is something I will always appreciate. There’s just something about the attention to detail, where the bodies line up in a fight just so, rather than looking like someone slapped down a stick figure into what they thought might be a fighting posture and then filled it out. The look of this comic is rounded nicely by the lettering of Justin Birch. I read somewhere that if a letterist has done their job well, most readers won’t even notice their work… Lettering is supposed to blend into the story, not take it over, and in that Birch does well as one of the unsung heroes of the comicbook medium.

Everything in Project Shadow Breed lines up, from the writing, to the art, right down to the lettering. Overall, it’s a great example of an independent title that deserves attention. It doesn’t just throw a bunch of junk against the wall to see what sticks, and it’s definitely more than a series of fluff pictures and clunky, overblown dialogue.

Now, who wants to take bets on whether Marrok’s name was taken from Arthurian Legend, or the Mercy Thompson books?