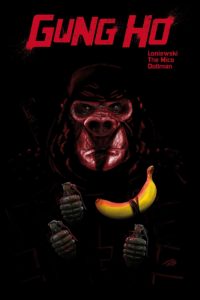 A fugitive ape, fighting to redeem his militant past, must battle vengeful superheroes and bigoted humans as he races to stop his radicalized mentor fused with dangerous powers.
———-

When the animals rise up to throw off the chains of human oppression, the mighty Peacekeeper and his Champions of Humanity are there to defend the helpless. Wherever the forces of darkness would threaten the livelihood of decent taxpaying people, the Champions answer the call. All that they ask is that we members of the human race do in return is to never turn a blind eye to those animals who would try to stand against us… or even live among us.

Mike Loniewski sent me a copy of his book for review, and it looked interesting. The concept is quirky enough to appeal to my sense of the absurd, and the artwork is eye-catching for anyone who ever found themselves roped into watching the early work of Gendy Tartakovsky (Dexter’s Lab, Samurai Jack, Star Wars: The Clone Wars). The story picks up five years after the Champions of Humanity defeated the evil Hector and his terrorist forces. Formerly a member of those radical troops, the ape Oliver is still trying to overcome the stigma of his past villainous associations. As it turns out, Oliver wasn’t so much into the violence and mayhem for its own sake. He was only looking to improve the standing of those like him, intelligent and fully sentient members of the animal kingdom trying to make a place for themselves among their former (insert bitter hint of sarcasm) masters. To do that, Oliver has taken it upon himself to perform jobs that will get his name and face out into the public eye in a much more positive manner than he had before, when he operated under Hector as one of his lieutenants. Unknown to most, he’s also working in secret, going out at night and fighting crime as the mysterious vigilante known only as “Gung Ho”.

As a comicbook, Gung Ho works on a couple different levels. First and most obviously, it’s entertaining as all get out. The action, delivered with stylistic gusto by The Mico (when not just any ol’ Mico will do), is quick and easy to follow. Oliver is as dynamic an action hero as you could hope for, with the guts and brawn to back up the audacity he brings to the table. The style works very well with the setting, as we’re shown multiple class levels in a severely divided society: the upper class humans, the downtrodden animals, and the secret underbelly populated by everything from supervillains to working class crime fighters. Mico (“The” to his friends, maybe?) does an outstanding job of blending what look to be simplistic visuals at first, into some pretty complex sequences that are nicely rounded out by some pretty slick effects and coloring. Also, as lettered by Marco Della Verde, the story isn’t interrupted by text boxes, or word balloons- but occasionally & wholly appropriately by explosions and other sound effects- but is allowed to carry on unhindered.

Since we’re already talking about the story, I think now’s a good time to say a few nice things about Mike Loniewski. First of all, he was awesome enough to voluntarily send me a copy of his book. I don’t know if it’s occurred to anyone else, but just putting something that you’ve made into the hands of someone with the sole intent of having your work judged has got to be nerve wracking. While I don’t really consider myself much of a “reviewer” (“I don’t know art but I know what I like!”), there’s always the chance that I won’t like something and will either send it back with a “no thank you”, or maybe even worse will ignore the comic completely. However, Loniewski’s work here did not merit either of those responses. While I was at first pulled into the book based on its visual style, I stuck around because the premise got a hook into me within the first couple pages. Not wasting any time at all explaining the whats and whys of his world, Loniewski gets right down to his story and leaves it up to the reader to fill in the blanks. That’s a tough call for some writers to make because it takes control away from them, and lays all of their faith on the audience and their perception. In this case, it works out very well in an excellent use of the writing adage “show, don’t tell”.

Outside of the mechanics of how he told his story, Mike has also done a good job of putting together something with a little more depth. Gung Ho is a story of redemption in the face of social injustice and inequality. That’s a theme that’s going to resonate with some more than others, without going out of its way to alienate most readers. What works well here is that by using a society split between intelligent animals and arguably evolved humans, Loniewski isn’t limiting his commentary to something as arbitrary or controversial as most of our current hot buttons. We’re able to make a pretty easy judgment call based on what we see- animals trying to eke out an honest living in the face of all too human arrogance and self-righteousness- instead of being stuck in emotionally charged ruts of thought.

However you want to read it, Gung Ho is a solid title to check out. As a ComiXology Submit entry, it’s easy to get your eager mitts on, and coming in at 99 cents for its fifty-five page count it’s a bargain. How can you not give it a try? 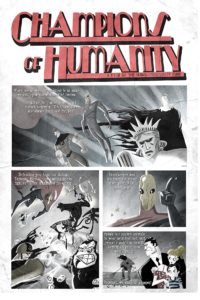 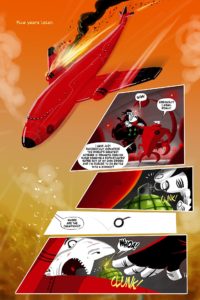 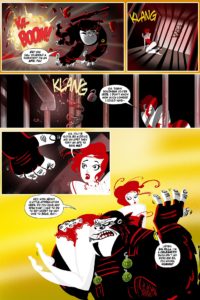