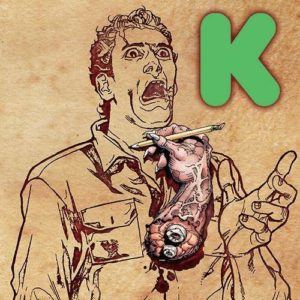 (October 31, 2017 – Bellingham, WA) – Space Goat Productions launched the Evil Dead 2 Comic Book Omnibus and Art Book Kickstarter on October 19. They were successfully funded at $20,000 on October 25 with 30 days left in the campaign–and they are just getting started.

Included in their campaign are the giant 8″ x 12″ The Art of Evil Dead 2: Comic Books and Board Games as well as The Evil Dead 2 Omnibus. Both tomes are housed in a slipcase styled after the iconic Necronomicon Ex-Mortis from the cult classic film.

“These are big, beautiful, high-quality books that every Evil Dead fan will love to add to their collection,” said publisher Shon Bury.

Offered on the campaign was a tier that included a Kandarian Dagger alongside the slipcase set as well as a separate tier that offered the Necronomicon Ex-Mortis with the slipcase set. Both tiers sold out the first day. These prop replicas were sculpted by Tom Sullivan, the actual FX Artist that made the book and the dagger for Evil Dead 1 and 2.

In response, Space Goat Production reached out once more to the prop maker to secure more for a later 2018 delivery. Due to these events, Space Goat Productions is now able to provide a limited tier of 75 that includes the hardcover slipcase as well as both props and the Evil Dead 2 book set for $180. This new tier ships in July 2018. Supplies will not last long.

MORE ABOUT SPACE GOAT PRODUCTIONS:
Created in 2006, Space Goat Productions has 150 years of combined experience producing comic books, tabletop games, video games, commercial art, and concept design. They have worked on global brands and produced commercial art with Blizzard Entertainment, Riot Games, Marvel Comics, DC Entertainment, Disney Interactive, Nike, Universal City, Penguin, Capstone, Scholastic, and more. Space Goat is the publisher of the Evil Dead 2 and The Howling comic books along with their line of Backpack Editions, graphic novels designed to fit in the backpacks of a diverse readership. Their new tabletop game division, Space Goat Play, launched with the Evil Dead 2, Terminator, and The Howling board games to critical acclaim. For more information please visit www.spacegoatpublishing.com, www.merchgoat.com, and on Facebook at www.facebook.com/spacegoatpublishing

MORE ABOUT STUDIOCANAL:
STUDIOCANAL is a subsidiary of the CANAL+ Group. It is one of Europe’s leading companies in the market for co-production, acquisition, distribution and sale of international feature films. STUDIOCANAL is the only studio operating simultaneously in three main territories across Europe: France, the United Kingdom and Germany. The company distributes a total of more than 50 films a year throughout Europe. Additionally, STUDIOCANAL owns one of the most important libraries in the world, with more than 5,000 international titles.

Here’s a peek at a couple of the pledge awards… 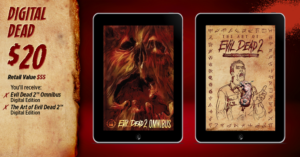 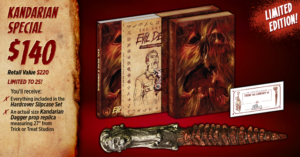