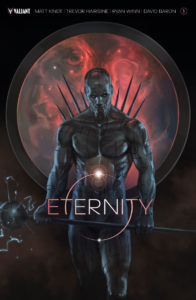 In the tradition of the sweeping cosmic epics by the twin giants of the form — Jack Kirby and Moebius — witness the coming of the 21st century’s next great modern myth right here, only in ETERNITY #1 (of 4) – featuring covers by Jelena Kevic-Djurdjevic (FAITH), Tom Muller (DIVINITY), Trevor Hairsine (Ultimate Six), Matt Kindt (Dept. H) and Felipe Massafera (Shaper)!
———-

Somewhere in Ugra National Park, Russia, an idyllic family lives in a rustic cabin. Abram and Myshka, recipients of god-like power of unknown origin, raise their child as close to normal as they are able. In Australia, in a place called “Second Eden”, David Camp writes the scripture of the being known as Divinity. Somewhere… else… among a society of strange beings, a death kicks events into motion. The Observer, who knows all and sees all, has been murdered, and the Brothers of the Bomb have been tasked with resolving the crisis before events spiral out of control.

No longer happy with a merely inter-galactic Valiant Universe, writer Matt Kindt and artist Trevor Hairsine are kicking things into the cosmic. Eternity is the first issue in a title that promises to bring new levels of epic to the Valiant line of comics. What better way to start than to reduce the two characters of the Divinity titles, Abram and Myshka, to the role of frantic parents as they’re drawn into events beyond even their understanding?

Fresh off of a successful new story arc on X-O Manowar, Matt Kindt takes a step beyond mere “science fiction”, and into a new universe that might’ve made world builder Jack “King” Kirby proud. This first issue looks like it’s barely scratching at the surface of that universe, but it’s already showing some interesting looks into a world of bizarre and powerful beings. What I really like here is that Kindt isn’t using excessive exposition to reveal these new worlds and their inhabitants. In an outstanding example of “show, don’t tell”, he’s allowing readers to learn as we go, rather than beat us over the head with rambling dialogue.

Kindt’s job is made a little easier through the artistic touch of Trevor Hairsine (pencils), Ryan Winn (inks), and David Baron (colors). I have to say that the work they’ve done on this issue have presented vistas and environments that easily qualify for the descriptor of “alien”. Over the course of just a few pages, this artistic team has given us a look at six distinctive races, three unique backgrounds, and one two page spread that should feel right at home in a gallery focusing on examples of Expressionism. What’s more, Hairsine still gives us what we’d expect in a comicbook, with dynamic yet proportionate figures striking heroic poses, without dipping over the line into territory best left to the likes of Rob Liefeld. The total effect is topped off with Winn and Baron putting the finishing touches. Coming from Valiant, always putting out great looking books, the crew working Eternity don’t disappoint.

Eternity is set to do for the Valiant Universe what the introduction of Apokolips and the Eternals of Titan did for DC and Marvel. It’s an ambitious looking title, especially given the origins of some of Valiant’s other flagship titles that are steeped heavily in galaxy spanning science fiction. This first issue is absolutely worth a look, if for no other reason than its promise of things to come. 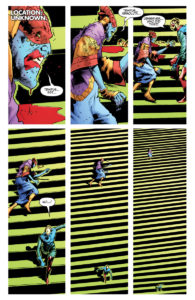 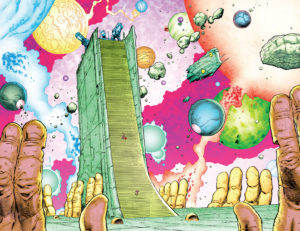 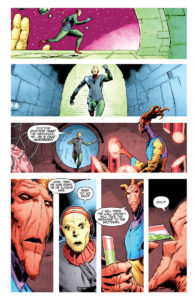 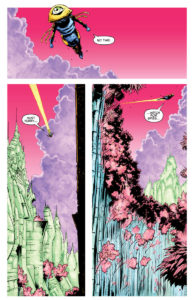 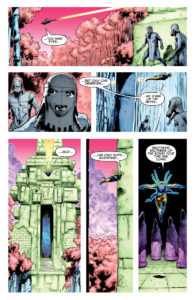 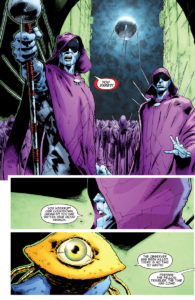