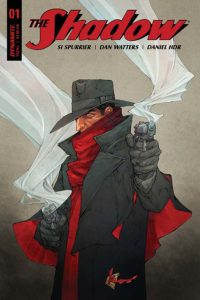 For the better part of a century the Shadow’s sinister laughter brought the chill of fear to evil-doers – but in our modern times, the streets of Manhattan have gone largely silent. But he is not forgotten. Not by the people he’s saved. Mary Jerez, is one of those people. The Shadow saved her from a horrifying school shooting – Mary knows all too well what evil lurks in the hearts of men.

So when a horribly burnt man – incredibly strong and fierce, despite his terrible injuries- arrives under her care as a resident at the hospital – she believes she knows who he is, too. Is this mysterious man actually the Shadow – and with Mary’s help, will evil-doers again know what it means to fear his terrible justice?

Si Spurrier (X-Force, X-Men: Legacy, Judge Dredd) and Daniel HDR (Superman, Cyborg) bring the pulp icon into modern day in a tale full of deadly intrigue, gun-blazing action, and a study of the nature of evil!
———-

Originally created as the voice over host of a radio detective drama in the late 1920’s and into the early 1930’s, the Shadow was finally given form in 1931 by writer Walter B. Gibson. It seemed that the voice on the radio program, meant only to introduce and close out the show’s episodes, had gained so much notoriety that the show’s producers wanted to capitalize on it. From there, the Shadow has become ingrained in our society as a part of pop culture. There aren’t too many people out there, even after all this time, who wouldn’t be able to answer the question, “Who knows what evil lurks in the hearts of men?”

Through radio programs, pulp magazines and novels, movie serials, actual movies (both back in the 1930’s and one disaster of an attempt in 1994), and most recently comic books, the Shadow has carved his mark into our society. He’s one of the first “men of mystery”, and his DNA can be found in many popular comic book characters to this day. Now Dynamite Entertainment is giving the old man another spin, this time starting the story in a modern setting.

I don’t mean to say that they’re rebooting the Shadow with a new history, for a new generation… and that’s a good thing. The Shadow works because of his history. He’s an icon of his time period, and I’m not really sure that he’d work out as a new character in a modern setting. What Dynamite is doing here is creating a bit of a mystery around the character that already exists, and has existed since the 1930’s.

An intern is changing the dressings on a burn victim, the whole time chattering away to poor soul like he’s her therapist. She tells him the story of her brush with death, during a high school shooting when she was a teenager. Two armed losers with delusions of grandeur had stormed the halls of her school and had her in their sights. At the last moment, HE arrived on the scene, preceded by the eerie laugh that’s become his trademark. Both shooters were dealt with, and the Shadow faded back into the scenery, again the laugh lingering in his wake and burning itself into the young girl’s memory.

So how does this story relate to the young woman, now on the verge of graduating from medical school, and the unfortunate patient she chooses to open up to? That’s the story, isn’t it? Who is this mysterious burn victim, and why does the young intern decide to open up at random? Look, I ain’t no spoiler, so if you really need to know- as if you haven’t already guessed- you’re just gonna have to pick up the book and read it.

This series is starting out with a very slow burn, Si Spurrier & Dan Watters seeming more than content to take their time getting down to the nitty gritty. There’s no action to speak of, except what’s related by the intern in the flashback, but the narrative still works well, the intern’s voice almost audible in whispers. This is the Shadow, a figure so steeped in mystery that of course his legend would spread in the telling and re-telling of his exploits, campfire stories told about a bogeyman of legend. His story would grow in whispers of, “so I heard about this guy, and you’re not gonna believe this, but…”

The approach may disappoint some of the more impatient readers out there, but personally I think it works great. There have been stories told aplenty where the Shadow is in his heyday, period pieces taking place at the height of his crime fighting career. What this story is doing is building on that mythology, and adding even more mystery… Were the high school shooters taken down by the original Shadow, and if so, how old is he now? If not, who is it wearing the cloak and scarf, wielding the twin .45’s that are the Shadow’s trademarks? These are the questions we’re left with, and for what it’s worth I’m digging the more gradual build being laid out by Spurrier and Watters.

The work being done by Daniel Hdr and Natalia Marques does a good job, handling the relatively sedate pace of the story so far. The flashback gives a brief look at the Shadow’s more dynamic aspect, and I’m sure (I hope) we’ll get more as this series progresses. In the low key moments that made up the majority of this issue, the characters and their activities have been pretty straightforward. I’m looking forward to seeing how things move along from here.

This story arc from Dynamite Entertainment has started off slow, but it’s a good slow so far. It establishes a bit of a mystery, putting some questions out there and giving away only a few of the more obvious answers. It’s something a little different from the normal storyline, in which the Shadow confronts yet another criminal mastermind or evil genius, and I’m all in favor of what’s been laid out so far. 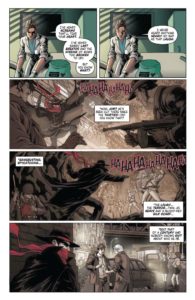 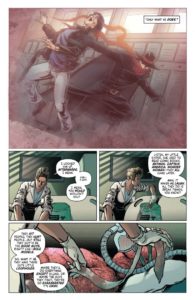 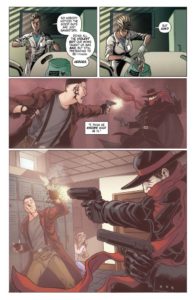 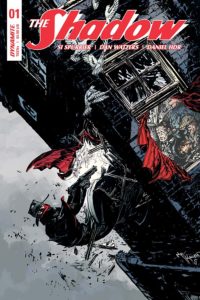 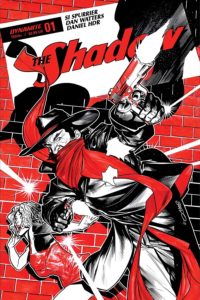 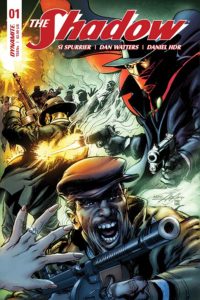 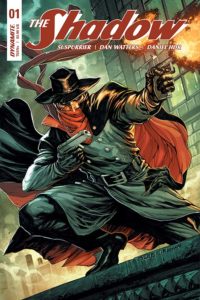