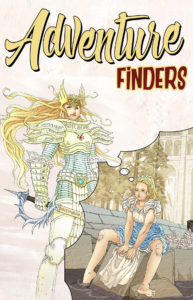 Rob Espinosa @Rod_Espinosa has always been a guilty pleasure of mine, because I’m pretty sure I am not his target audience.  But I do like good art and I’ve always loved his meticulousness, his use of color, and mostly the clarity of his storytelling.

In Adventure Finders #1, we find Clariette and her small-town friends “who want to make it big as renowned fighters!”  This double-sized issue has the typical Espinosa easy to root for, plucky, female lead, a bit of a rebel and outsider with a big dream, and a society slightly biased against her.  If you are an Espinosa fan, of say Neotopia, Courageous Princess or Snow White, you will not be disappointed, maybe even pleasantly surprised.

I first became aware of Espinosa in 2005 about the time I started up the comic store in Oconomowoc, WI.  I assumed he was a long standing industry master that I hadn’t run across yet, when in fact he had only appeared on the comic scene a couple of years earlier out of the Don Bosco Technical College in Manila, Philippines. 2002, I think.

What I’ve always liked about Espinosa, besides the art, is that he takes his time with his stories.  No modern story structure rush.  He builds his stories more like 1950 science fiction stories, building a back matter foundation before moving on.

And Espinosa jams alot jams into this first issue.

Not all the scenes are perfectly natural, not all the transitions are perfect. I’m not even certain the scenes are in the right order, but that is probably a personal preference thing. As I said, I’m used to meticulousness from Espinosa, and Adventure Finders seems a little rushed, in the anatomy specifically, and facial profiles in particular, but these are very minor things in the swirl of a very detailed and enjoyable story.

It’s hard to say what makes a good writer and what makes a blah writer.  Espinosa has always been a good writer.  I can’t always say why.  He takes his time with his stories.  Because of his aptitude with timing and dialogue, the stories often read more like animated movies than graphic novels.

If you’re not familiar with Espinosa you should know he deals heavily in genre tropes, anime and fantasy, but there’s something about the way he deals with them that keeps the reader on their feet.  There are times when I’m sure I have the story pegged, and then he drops in something subtle and unfamiliar that throws me off, and I start wondering.  The trope may go where I expect, but Espinosa’s slight of hand keeps me guessing.  Other times the trope diverges and does not go where you think it will at all.  He uses the limitations and expectations of the genre to keep you guessing.

Regardless, wiith Espinosa the emotional beats are always there, the dramatic aren’t wasted and always held for key moments.  Nothing ever becomes too melodramatic. Nothing ever feels totally forced.   And while world building detail can sometimes  bog down a story, in Espinosa’s hands it does not. His use of honorifics is extensive, but not intrusive. He gives you credit for understanding cultural details instead of explaining them.

Adventure Finders #1 is loaded with great, subtle details that Espinosa trusts the reader to find.  The lead character Clairette is chastised in school for wearing clothes whose sleeves are too short and hem too high, but the minute she leaves school she is drawn with her sleeves rolled high on her shoulders as another subtle reminder of her independence.  No particular attention is drawn to this detail in the dialogue, it just is.  That’s the kind of story-telling I’ve come to expect from Espinosa.

I’ve got no good place to put this, but something also should be said about Antarctic Press. While often a little too puerile and pin-up girly for my tastes, you have to give them credit for being fiercely independent since their inception in 1984, and successfully outside the mainstream.  I think because of the pin-up-iness of some of their books they are often overlooked, and the company itself is overlooked.  A lot of credit goes to Ben Dunn @zetared & Joe Dunn for taking the risk and striking out on their own.

I’ll be honest, reading Adventure Finders #1 has made me want to take a second look at some of Antarctic’s titles.  It is focused enough and its hooks placed well enough, that I’m interested to see how it resolves/continues in issue #2.   Hunt it down at your local comic book store or order online from Antarctic Press directly.  If you love it or like it alot follow Rod on Patreon at https://www.patreon.com/RodEspinosa.